About the London Mithraeum

The restored Temple of Mithras, now sited close to the site of its discovery underneath the Bloomberg office block.

The Temple has been rebuilt in a dark room as an echo of how they used to be, and you are given a 15 minute "experience" in the temple.

You are recommended to book tickets in advance as there might be quite a wait for a slot otherwise.

Free
A monthly late opening of the restored Roman temple found near Bank in the City of London in the 1950s, and recently restored to its original subterranean location.
Thursday, 7th Jul 5pm to 8pm 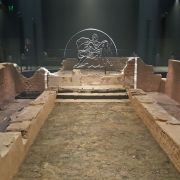 Two Adam Dant exhibitons in London at the same time

A bit like buses, you wait for ages for an Adam Dant exhibition, then two appear at once. The famous maker of arty maps now has displays in Westminster and the City of London.

An oral history of the London Mithraeum

A delightful video has been released of a group of people who were at the original excavation of the London Mithraeum and recently returned to see its restoration.

Booking opens to visit the Temple of Mithras

In a couple of weeks time, London’s newest museum opens to the public, and booking for entry has opened today. 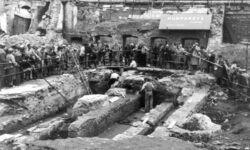