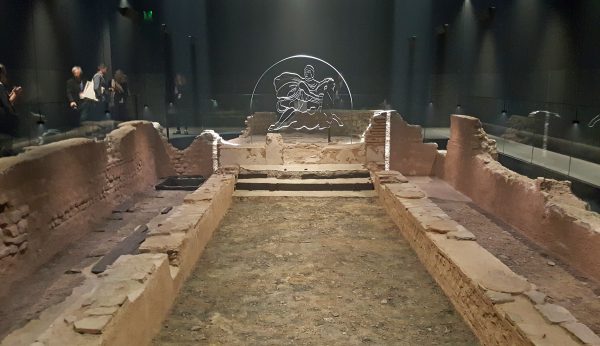 Now deep down underground whence it came, the Temple has come alive with a dark gloomy space slowly revealed as lighting recreates long lost walls and chanting recreates the atmosphere that would have been familiar to Roman worshipers.

Mithraism was a mystery religion centred around the god Mithras that was practised in the Roman Empire and very popular with Roman soldiers and merchants. In that it was unlike many Roman cults which tended to be exclusive to the nobility.

Initiates of Mithras called themselves syndexioi, those “united by the handshake”, so in a way, they were the original Freemasons, and like the Freemasons, they had secret rites, which were never written down and are now lost to history.

The iconic scenes of the god Mithras, as recreated in the Temple show him being born from a rock, slaughtering a bull, and sharing a banquet with the god Sol (the Sun), and it is now thought that the religion was a rival of early Christianity.

Had history taken only a very slightly different path, Christianity could have remained a Roman cult, and we would all be Mithrayans.

The slightly subterranean temples built by the cult recreated the cave where Mithras killed the primordial bull, and although many were built in the Roman Empire, just four are known to have survived in the UK. And one of them famously is in London – in the centre of the Roman city where it would have been an important place of worship for the soldiers enforcing the Emperor’s rule. 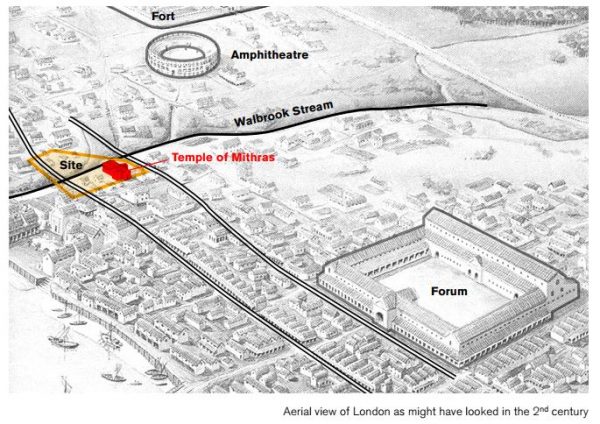 Built in the middle of the 3rd century AD, the Temple is deep under the modern street level, but even when built, was slightly subterranean. In the late fourth century it fell out of use but survived as a standing ruin into the Anglo-Saxon period until it slowly sank beneath the ever rising street level of medieval London.

It lay untouched, deep under streets until 1952, when the clearance of a large bomb-damaged block of buildings for the construction of a typically bland office block of the period uncovered the Temple. The discovery of the Temple was one of the most important of all twentieth-century Roman discoveries in the City of London and famously crowds queued for hours to visit the site during the excavation. 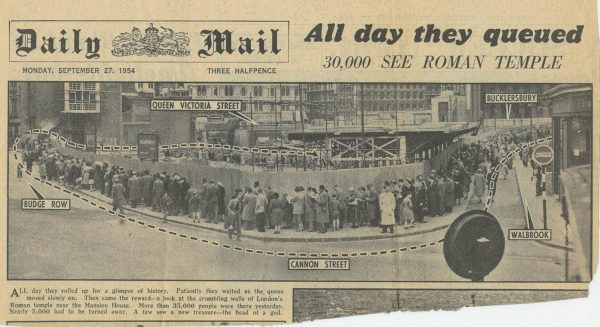 Found within the Temple where they had been carefully buried at the time of its rededication, were white marble likenesses of Minerva, Mercury, Mithras and Serapis. Another earlier discovery was a marble relief of Mithras in the act of killing the astral bull, the Tauroctony. After careful recording, the remains of the Temple were dismantled and removed from the site. The statues from the site form the core of the display about the Temple of Mithras in the Museum of London.

The stone remains of the Temple were brought back to site in the 1960’s and reassembled on an elevated concrete platform. The reconstruction was botched. A number of original stones went missing (stolen), and were replaced by unconcerned masons with some modern stones, and they used cement mortar to glue it together.

The less said about the crazy paving used inside the temple the better. 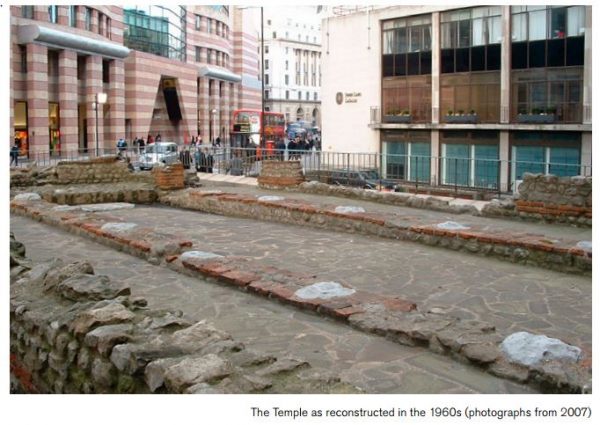 At the time, the reconstruction of the Temple, positioned as it was where it could be readily viewed by the public, was considered to be a good compromise, allowing something of the Temple to be saved and the Bucklersbury office block to be built. However, even in 1962 the reconstruction, on top of a car park no less, was considered inadequate. The Temple was in the wrong location, the wrong orientation and at the wrong level.

Not only was it unfaithful to the remains, but all of the mysticism associated with it being largely a subterranean place of worship had been lost.

And there it sat, unloved for decades until now — when the 1960s buildings were torn down and an opportunity presented itself to do something better with this remarkable Roman find.

As part of the new Bloomberg building development, it was agreed that the Temple would be restored, and also relocated to roughly the same location that it originally occupied — a basement chamber that may restore some of its original atmosphere. 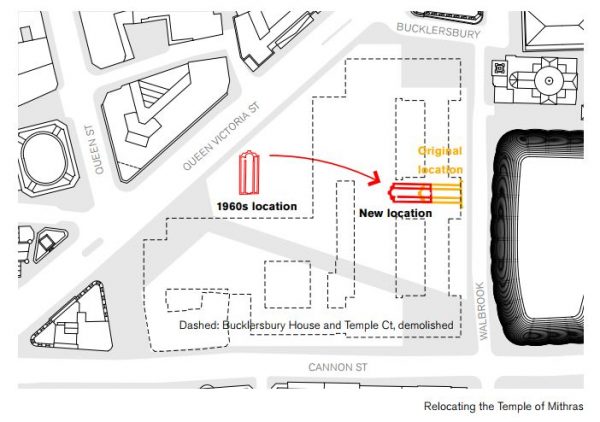 It was intended that the temple would go back to exactly the same location, as it was assumed all the Roman remains had long since been removed in the 1960s.

However, in 2005 during the course of investigative works, remains of the wall from the eastern end of the Temple were unexpectedly discovered. Another test pit in 2008 revealed the foundations of the south sleeper wall and the south wall. In 2001 a large trench was opened on the Walbrook frontage.

This confirmed that masonry remains from the temple survived the 1950s excavation. These remains are considered to be of very high significance and in line with modern practices rather than being removed, have been protected and covered over.

Ironically, the discovery of the original roman remains still in the site means that the restoration of the Temple can’t be at the exact spot as it was removed from, as that would disturb the remaining Roman building, so they’ve rebuilt the Temple a few feet away where it would have originally been.

Although that means it today sits at the old Roman street level, that’s still 8 metres underground today, and a suitably subterranean effect.

While the new re-construction includes only the ground floor walls, the low dark space gives the visitor the atmosphere of a mithraeum.

The museum sits underneath an art gallery type area, the Bloomberg Space, and this is a bit of a pity, as random passers by will see a posh art gallery not a museum – and you need to be inquisitive, or know what’s there to be tempted to go inside. 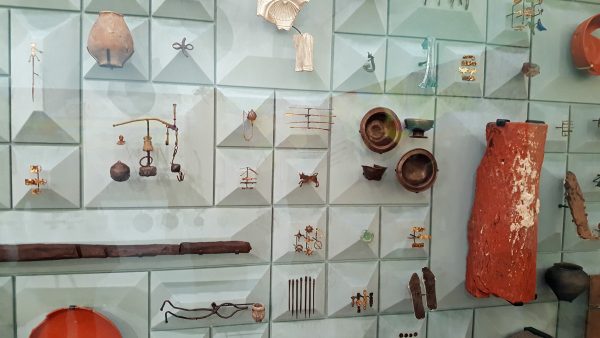 Away from the white art space, a dark corner, and here the Roman remains that were uncovered during recent excavations look almost like a modern art display, but also lure you closer to the subterranean treasure below.

A lower level is essentially a waiting room with some digital displays and an audio introduction, and waiting may be needed, for the Temple below is part of a carefully timed display.

Deep below, a dark room awaits. Small lamps hang in the air offering just enough light to let you make out the stone walls that lay within. It’s as if you’re looking at a precious document that mustn’t see the light of day, but light finally arrives. 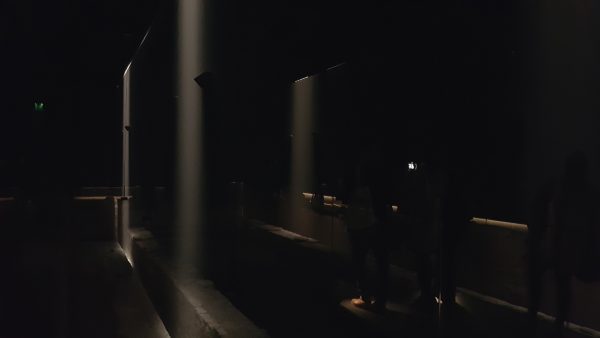 Sheets of light drop from the ceiling to create the long lost walls that would have surrounded the Mithraeum, and chanting, based on graffiti found in Rome echoes around the room. 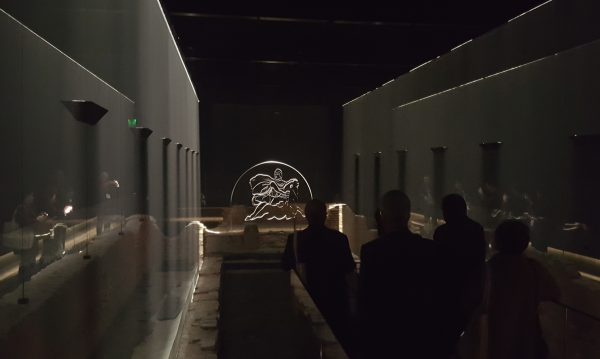 Slowly, carefully, the lights change and grow brighter. The altar flares into life, and then the Mithraeum is revealed as the sheets of light shine brighter and illuminate the subteranean space. 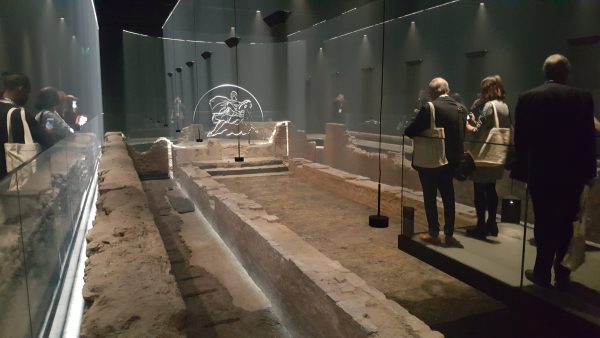 The new setting, deep underground, and the lighting display makes this a place to visit, to experience and, yes, to delight in. It’s a different way of showing off a ruin, but in honestly, had they not done something with the space, it might have been just a pile of rocks in a space. Very important, but not evocative of the temple it used to be.

That it’s completely free of charge is a wonder. The entire cost has been picked up by Bloomberg, including the ongoing running costs, which for a display of this nature wont be cheap.

This display works, it really works, and it delights me to see the Temple not just restored to its rightful home, but to have been given such a splendid setting.

The London Mithraeum is free to visit, but you are recommended to book a slot in advance as there are timed visits, lasting around 15 minutes. 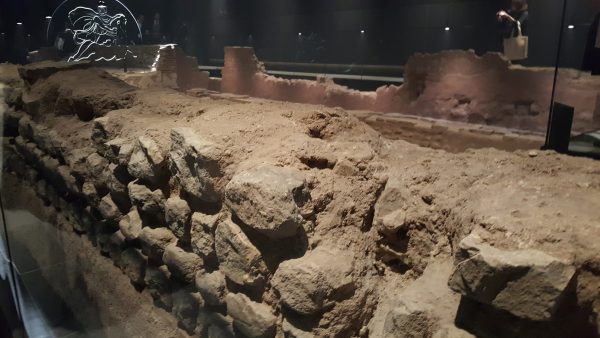