It’s also entirely free to download if you don’t mind a PDF version.

Although about Roman London, unsurprisingly, the book focuses on the region around the Walbrook river, the origin of Roman London, and the site of the Temple of Mithras. Starting with a number of illustrations of London before it was London, the book is a mix of a general history of Roman London as well as specifics the archaeology has uncovered. 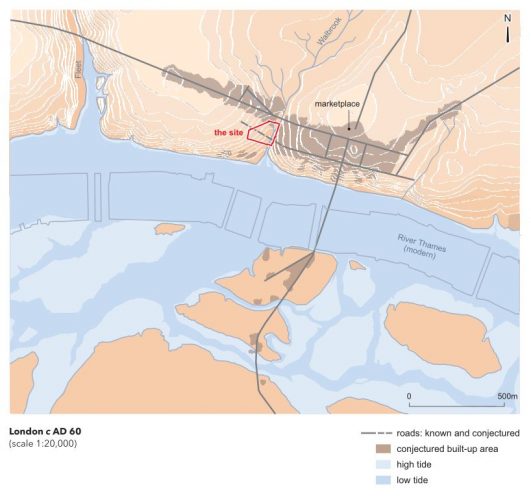 As London evolved from a rural outpost into a fortified town through a number of insurgencies, the last documentary mention of Roman London occurs in AD 367, in connection with the Emperor Theodosius arriving in Britain to restore order after a ‘barbarian conspiracy’ had left it in chaos.

The Roman administration and last army units left Britain during the first decade of the 5th century AD. After a space of 400 years of being abandoned, London was refounded as a medieval town in the late 9th century.

The book is broken into chronological chapters from AD43 to modern times, each supported by maps, photos of artefacts and some drawings of how London might have looked.

Of course, the fire of London makes an appearance, and the book charts the various changes to the plot of land today occupied by the new Bloomberg Building and Temple of Mithras. It concludes with that great discovery in the 1950s of the Temple itself and the excitement that it generated in the general public, and the rather desultory display it was subjected to following its excavation.

Now the temple has been restored, and this book published.

If you want a brisk history of Roman London and an idea of how detailed archeology can reveal a hidden history of a patch of London, this book is rather good. That’s it’s also free makes it exceptional.

The book doesn’t appear to be “on sale”, although copies were printed to be handed out as the temple opening (I have one), but on the upside, they’ve made the book available to everyone for free as a PDF download.

The book, Archaeology at Bloomberg is an illustrated guide to the archaeology and history of the Bloomberg site and can be downloaded from here.

It’ll make for a pleasing diversion over Christmas.