On a side street of antiquity near Cannon Street station can be found a small yard set back behind imposing buildings, and the site once of the home of a notorious young nobleman. 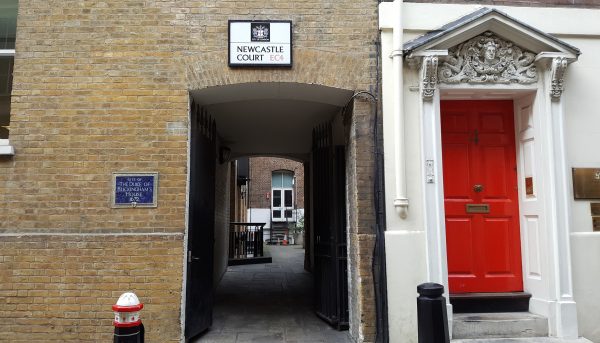 The layout of Newcastle Court is in a pre-18th century fashion for buildings around a courtyard rather than facing onto the streets, and is a rare survivor of that taste within the City of London.

It’s not Newcastle after the city, but New Castle, as in the former yard that sat within the new castle built on the site by the Duke of Buckingham. Castle in this case being code for “nice house”. 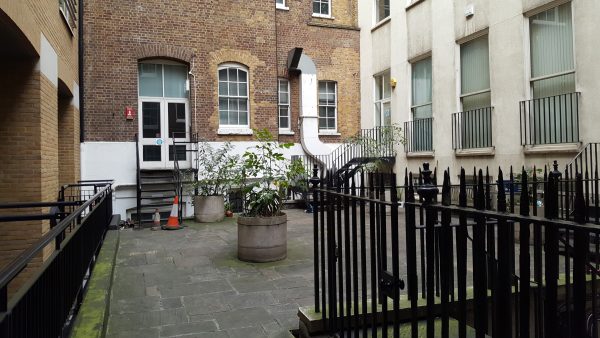 Today it seems to be retained more for the ability to have windows in the tall offices that surround it getting some daylight rather than as a pleasant space in its own right.

A few wooden benches offer seating space, although one is in dire need of repair. Both were donated by the Atlantic International Bank in 1977.

Otherwise, it’s a bleak site, paving, fire escapes and not much to admire. 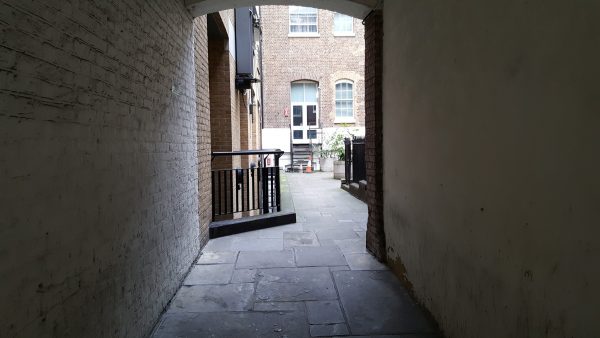 Which is a pity as the site is truly historic, as it was once the site of Buckingham House.

George Villiers was a minor gentlemen who caught the eye of King James I, and was promoted as a rival to the Earl of Somerset. Working his way up the greasy pole, he acquired ever more titles and wealth, and is pretty much presumed to have been the King’s boyfriend in court.

He built a home in the City on College Hill and became the Duke of Buckingham — at a time when he was the only Duke in the Kingdom.

He was assassinated at the age of 35 following repeated attempts by Parliament to impeach the increasingly unpopular nobleman.

The house he built was described by John Strype in 1720 as being very large and graceful.

At some point it was torn down, and the area converted into offices and warehouses. Apart from the livery company, none of those buildings now remain, and recent archeology suggest whatever was there has long since been lost.