A temple that was very nearly destroyed, as the then director of the London Museum, WF Grimes said at the time that preservation was secondary to recording the site in an academic journal, and frankly, preserving it was just too expensive. Why waste money letting ordinary people see a Roman ruin when academics could read about it in a book?

Fortunately, the public disagreed with the learned chap and crowds built up at the site within days to see what was going on and protest against its imminent destruction. Within a couple of days of the discovery becoming public knowledge, construction work was stopped to allow the archaeologists more time to uncover the site, which was fast becoming a major tourist attraction in its own right. 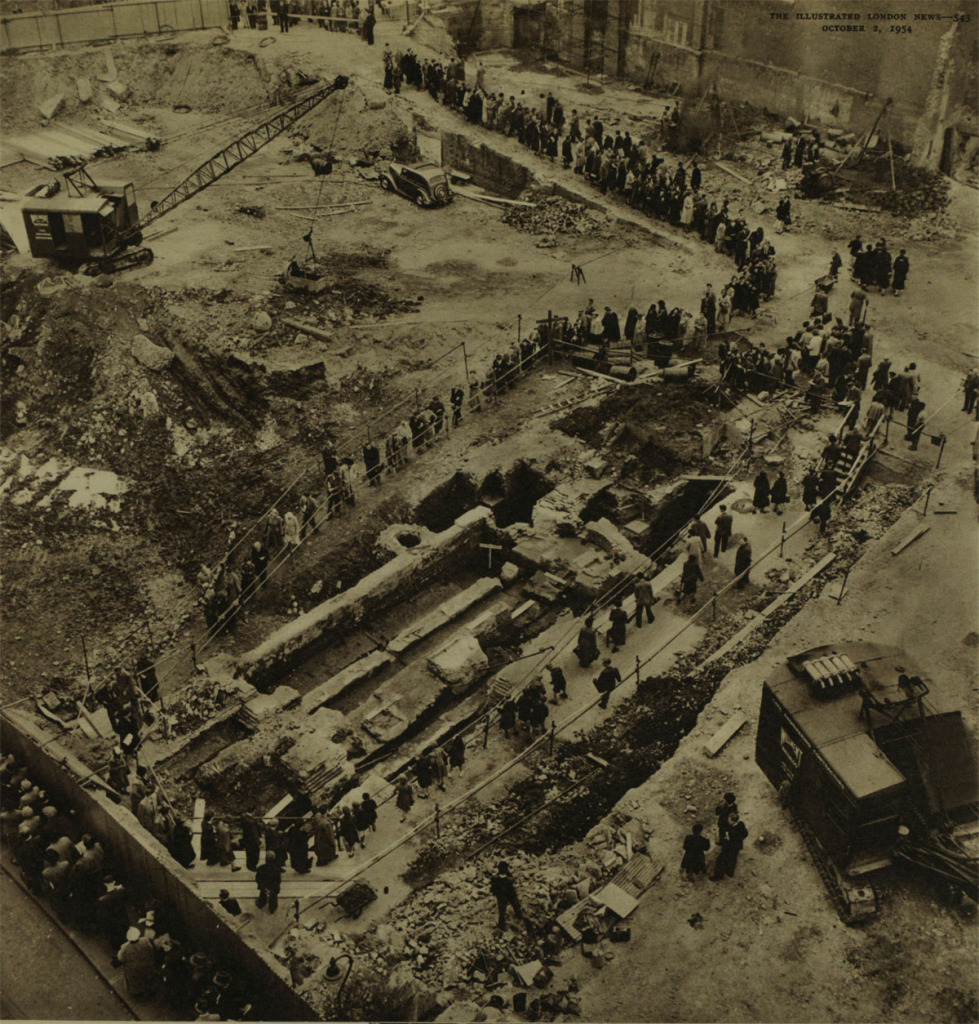 Newspapers reported the discoveries at length, with hardly a day passing over the two week excavation without a note in The Times or the Illustrated London News about the latest exciting find, further mobilizing the public to queue up for a look themselves.

An estimated 400,000 people flocking to visit the site over the two week period, queuing for hours along the streets of the City of London to glimpse the remains.

To capture this historic event, whilst it is still in living memory, Bloomberg and MOLA (Museum of London Archaeology) are undertaking an oral history project, collecting and celebrating the experiences of the people that went to marvel as the temple was exposed. Anyone who visited the site in 1954 is urged to contact us to share their memories.

A trial for the project has already revealed fascinating stories. A ticket has come to light that appears to grant access for members of the public to visit the site and perhaps even have a go at digging.

The oral histories will form a permanent educational and research collection, also encompassing photography and ephemera relating to the discovery.

At the time, a furious debate sprung up about the future of the remains, and it was estimated that preserving them in situ would have cost around £500,000 — or the entire annual government budget for historic buildings at the time. It was later agreed to move it around the corner to a location that wouldn’t have thrown so high a cost of modifications to the office block.

On 12th October 1954, barely a month after its discovery, the temple was lifted up and moved around to its new location for reconstruction work to start. It’s barely believable today that such an important historic discovery could be moved so soon after its uncovering.

The Temple has sat there somewhat forlornly ever since, at least until recently.

A new office block is going up — and the temple is to be restored and will be reinstated in its original position, 7 metres below ground level in a purpose-built, public exhibition space in the new Bloomberg building, to open in 2017. 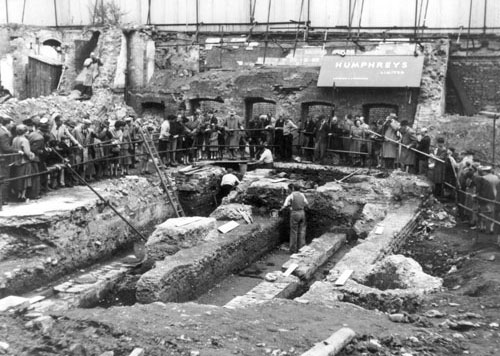 If you are interested in taking part in the Temple of Mithras oral history project or have images or ephemera relating to the discovery then please contact: [email protected] or 020 7410 2266