About the Tower Bridge

The bridge itself is free to walk across, and their website lists when it will open for ships.

There is also a paid exhibition space, which runs in the upper walkways, and then across the road to the original steam powered engine rooms.

Offers great views of the city from the upper walkway.

Tower Bridge usually opens for cruise ships and sailing ships, but in a couple of weeks time, a tanker ship will be visiting London and passing through Tower Bridge.

Cruise ships are returning to London in 2022

The cruise ships are returning to London, disgorging tourists, and for us Londoners, a chance to see big boats up close.

Behind the scenes tours of Tower Bridge

As Tower Bridge doesn’t open for boats as often during the winter months, they’re resuming their behind-the-scenes tours that include trips into the huge bascule chambers under the bridge.

There’s a possibility of a naval ship arriving in London on Friday and passing through Tower Bridge.

This coming Sunday will see Tower Bridge covered in nearly 1,000 photos of Londoners taken by the French artist, JR, who also happens to have an exhibition in London at the moment.

Behind the scenes tours of Tower Bridge

Normally limited to winter months when things are a bit quieter — the behind the scenes tours have resumed at Tower Bridge.

Considering how iconic Tower Bridge is as a symbol of London, it’s difficult to believe that just 50 years ago there were plans to replace it with a tunnel.

Tickets Alert: Behind the scenes at Tower Bridge

This winter there’s a chance to go deep inside Tower Bridge to see the mechanisms that make it work and the huge bascule chambers that sits below river level.

This coming Thursday evening (3rd Oct) will be a chance to see an experimental boat passing under Tower Bridge.

To celebrate 125 years of Tower Bridge, it will be hosting a series of one-off talks inside the the South Tower.

Underneath the Guildhall art gallery is a small space that currently has three historic documents on display.

At the end of this month, the famous bridge will mark its 125th anniversary, and is offering entry for just £1.25 all weekend.

Pyrotechnics and filming at Tower Bridge

A heads up that a couple of evenings next week could see bang bangs and boom booms next to Tower Bridge.

One of the final Royal Mail ships is visiting London

Next week will be a very rare chance to see the last of the government’s ocean-going Royal Mail Ships on a visit to London.

One hundred years ago, four German submarines slipped through Tower Bridge and into the Port of London, heart of the city’s cargo trade.

Tickets Alert: Behind the scenes tours of Tower Bridge

This winter, the behind the scenes tours of Tower Bridge return, offering access into the engineering spaces, and the huge bascule chambers under the main bridge.

Next Saturday marks (possibly) the very last time that the current Woolwich Ferry will pass through Tower Bridge. 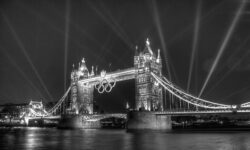 How to get into Tower Bridge for a Quid

A new Community Ticket has been launched that lets local residents into Tower Bridge for just £1 per person.

Watch a video and sound event underneath Tower Bridge

The huge empty bascule chamber underneath Tower Bridge is the setting for a video projection & sound installation inspired by the Blitz photography of Arthur Cross & Fred Tibbs. 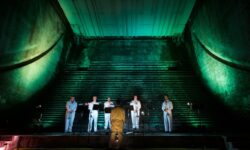 The huge Bascule Chambers underneath Tower Bridge are to be again turned into a music venue for a few days. 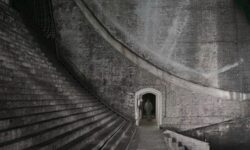 Tickets Alert: Music in a subterranean chamber under Tower Bridge

Underneath Tower Bridge are two huge empty chambers, but later this month they will be filled with music.

Pour your memories into a Tower Bridge Time Capsule 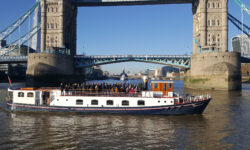