Buses that ply the streets around Heathrow Aiport, connecting passengers and staff to the airport will cease to be free of charge from this weekend.

Plans for a western rail link to Heathrow Aiport have been paused by Network Rail.

Plans to build a western rail link to Heathrow Airport have been delayed by several years due to the current financial situation.

Tickets Alert: Dinner and special tours of a Jumbo Jet

This coming Saturday (12th Dec), there will be a rather strange dining event - dinner on a Jumbo Jet.

A recent parliamentary debate on improving rail links to Heathrow Airport has agreed that such a rail link is a very good idea, but that it will need a lot more work to bring into existence.

Crossrail trains cleared to use the Heathrow tunnel

Last month, a significant achievement took place on the Crossrail project, which is far more important than the headlines make it seem to be.

A planned rail link from Heathrow heading out towards Reading and beyond has an uncertain future due to a funding dispute.

Take a trip in a vintage tube train to Heathrow airport

The London Underground's 1938 era art-deco tube train will be making one of its occasional outings in April.

Plans for a new southern rail link to Heathrow Airport are facing delays and might not come into operation until 2030.

Network Rail is to host a meeting for construction firms interested in a £900 million contract to build a new railway tunnel to Heathrow Airport.

50 years ago – planes start flying between Heathrow and Gatwick

Two large important airports, but passengers landing at one might want to catch a flight at the other -- so how about a plane flight between the two?

If you go down to Heathrow today, you're sure of a big surprise -- because there's a 13 metre long dinosaur in a Terminal building.

A consultation on a new rail link from the West into Heathrow airport has, unsurprisingly, gained support from the respondents.

A third and possibly final consultation is opening on plans to build a new rail link that will allow direct connections between Reading and Heathrow Airport.

Although Heathrow Airport has a couple of railway links to central London, they weren't necessarily the ones that we could have ended up with.

In our modern age, it's almost impossible to believe that a railway station could open in London, and close just six months later, but that is what happened, in January 1998.

We recently marked the 40th anniversary of the Piccadilly line extension to Heathrow Airport, so here are some photos of its construction.

40 years of Flying the Tube to Heathrow Airport

Forty years ago, a world first occurred, as the first ever underground rail link between an airport and a city opened -- and it was in London. 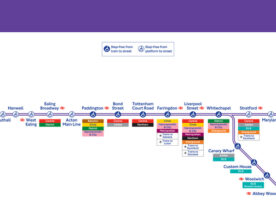 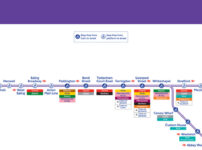 Elizabeth line gets an extension to Heathrow Terminal 5

The future Elizabeth line, which was already due to call at Heathrow Airport's Terminals 2 and 4 from next May, is to add Terminal 5 to the list, but not until December 2019.

Play with a real Boeing 737 flight simulator this weekend

A bit of a publicity thing, but there's a chance to fly a full scale Boeing 737 flight simulator this weekend - for free.

Underneath one of Heathrow Airport's runways, the remains of a so-called Early Iron Age, British dwelling, known figuratively, if inaccurately as Caesar's Camp.

Is it a plane? Is it a train? No, it's Railplace! Racing above the streets of London carrying passengers from city centre to airports, to Brighton, to Glasgow, all at unbelievable speeds.