A Victorian Bath House surrounded by glass and steel

Just around the corner from Liverpool Street Station, in a space surrounded by modern offices, can be found this Turkish inspired Victorian bath house. 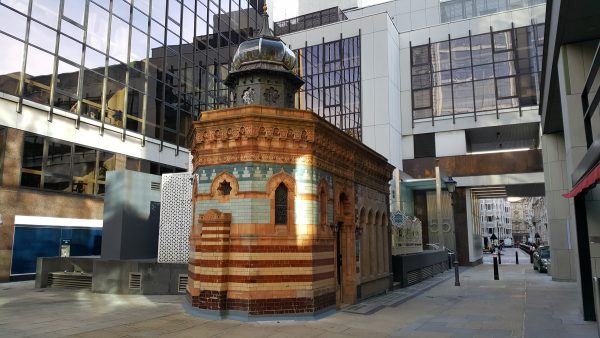 There has been a bath of one sort or another on the location for 200 years, since 1817, and by 1847, Dr Culverwell was providing a separate set of medical baths on the site.

In around 1883, the two baths on the site were sold to Jones & Co, who a couple of years later decided to revamp the entire site. Sold to the Nevill family, they decided to demolish the only just built bathhouse, and commissioned what we see here today.

Designed by G Harold Elphick, the current bathhouse used tessellating Arabic motifs in classic colours. Crafted to appeal to the gentrified city folk, the venue was an instant hit in the daily broadsheet newspapers.

As Turkish bathing was seen as quite the thing to do in Victorian times, and being in the city, it was very popular, although unlike other baths, it didn’t allow women. This is probably due to the size of the site which didn’t avail itself of the space for segregated facilities. 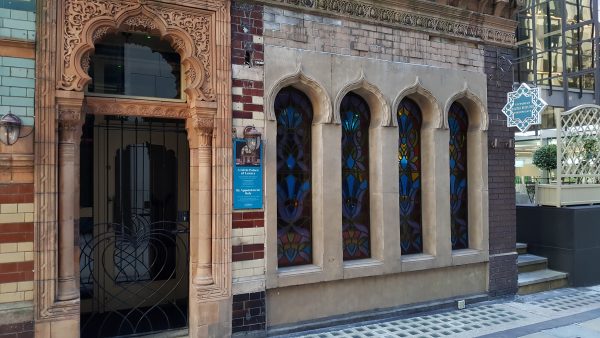 When built, the site was extremely cramped (photo) leaving only sufficient room for the small building above ground. The ingenuity of the planning was praised in The Builder magazine in February 1892.

It closed as a bath house in 1954 and was variously used over the years until restored in 2016 as the Victorian Bath House, a private events venue, and not open to casually wander in. But you can peer through the windows.

What you see though, is just the upper floor, as the bulk of the bath house is actually underground. It goes down two floors, although the bottom level is now the toilets. The main floor is seats and a bar, and appropriately for the location and history, the posh wines are kept cool in a bath filled with ice. 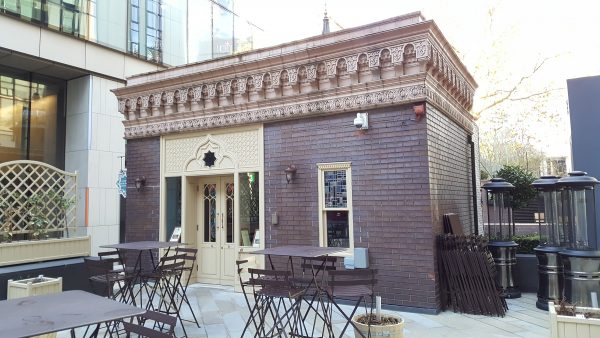