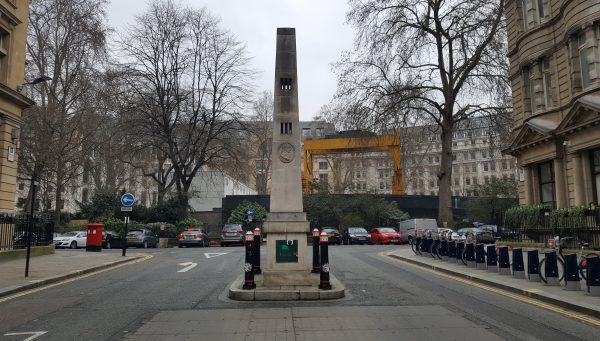 The stone obelisk is dedicated to the memory of George Dance the Younger, an architect.

In 1768, when he was only 27, George succeeded as Architect and Surveyor to the City of London, and his first major public works were the rebuilding of Newgate Prison in 1770 and building the front of the Guildhall.

The monument’s location here is while Finsbury Circus was laid out by William Mountague, it was to the designs of George Dance the Younger, as the City’s only counterpoint to the London squares of Mayfair and Marylebone. Prior to this, the site had been partially occupied by Bethlehem Royal Hospital, and the remainder was an open field with gravel walks for promenading.

So it’s fitting that a monument to the man exists, but why here, and what’s the monument’s real purpose?

You might start to suspect that the monument is not an isolated affair when you look at the road in front, which has the distinctive array of large manhole covers that tell you something large is underneath your feet.

Then take a closer look at the obelisk and you’ll realise that the indents in the top are in fact open spaces, and that they look like ventilation spaces for something. 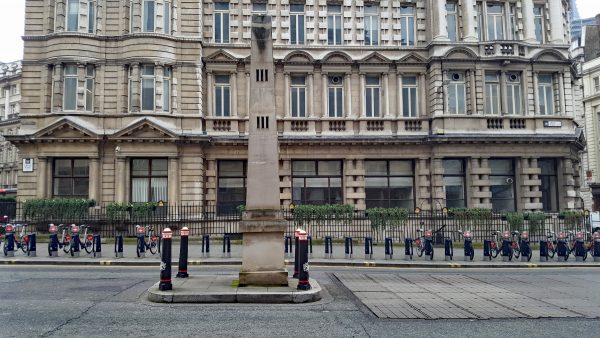 And indeed that’s what the obelisk actually is — it’s a ventilation tower.

The site used to be an underground toilet, but in 1982 the site was cleared, and while planned to be filled in, it was actually taken over by Transco for use as a gas storage facility.

The obelisk was erected fairly recently, by Transco, in 1997 to improve the ventilation of the underground gas storage facility and prevent any gas build up that could lead to an explosion.

The obelisk itself is a hollow structure which appears to be made from solid natural Portland Stone.

The natural stone panels had reinforced concrete cast onto the back, complete with cast-in lifting sockets, and ‘false’ joints to make the obelisk appear to be constructed with the joints as they would be if it were constructed in solid stone.

So there you are, hidden in plan view, a very industrial function decoratively hidden in the centre of Circus Place. 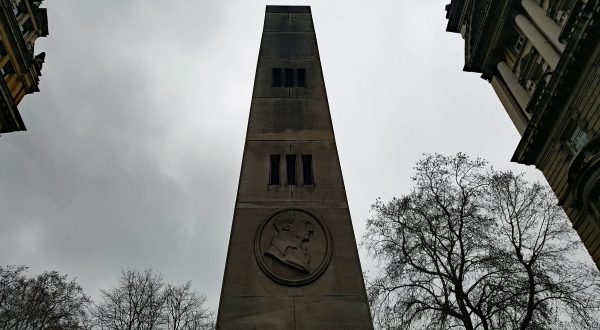 Incidentally, if you’re looking at Circus Place and thinking that it’s rather wide for such a short street, that’s because it should be much longer. The original plan when Finsbury Circus was built was to extend the road down to the Bank of England.