This is an alley with a very grand entrance that leads to a tiny dead end back passage that seems at first glance quite insignificant.

A short alley with a narrow covered passage that then curves around to a grand street with impressive buildings.

There’s a barbecuing “steam train” in Moorgate at the moment

If you head over to Finsbury Square at the moment, you'll see a very odd sight - of a black steam train surrounded by seating.

City of London to pedestrianise part of Finsbury Circus

It's only a short bit of road, but potentially quite significant as the City of London is planning to pedestrianise part of Finsbury Circus.

GTR is also upgrading and replacing all the way-finding and station name signs, a lot of which were installed in either British Rail Network South East days or earlier franchises and were grubby.

A mum and her four newly born kittens have been found living underneath an escalator at a London Underground station.

Over a number of days last November, Europe's largest load test was carried out on a series of concrete piles that were installed around Moorgate tube station.

A unique studio apartment is now available to view in a unique central London location. 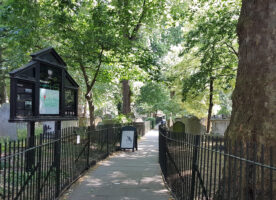 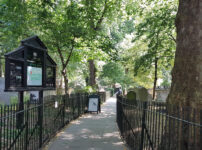 Just to the south of Old Street can be found one of London's oldest and greatest burial grounds, and one with a most unusual history. 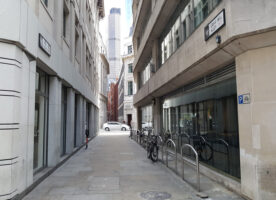 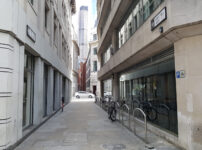 An alleyway exists just off Moorgate that has almost no redeeming features about it, other than its bland existence is, fortunately, a very short one. 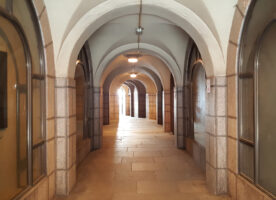 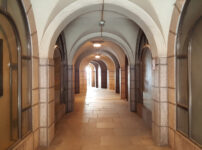 This alley is structurally modern, but has the air of an old church undercroft in its design, and lies on the site of a much older alley.

Unveiling a memorial to the Moorgate tube crash

A memorial was unveiled earlier today to commemorate the 43 people who died in the Moorgate railway accident that took place on the 28th February 1975.

This Friday, Moorgate station will close to Thameslink trains forever as the track approaching it will be cut off thanks to the Thameslink 2000 – I mean, Thameslink Programme – of network upgrades. Hinted at in this week’s issue of…