Tickets Alert: Walk along the bottom of an empty canal

Next month, one of East London's canals will be drained for repairs to be carried out, and you can walk along the bottom of it.

When walking along the Regent's Canal are you aware that you're walking just inches above a major electricity cable supplying London with power? 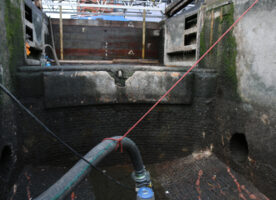 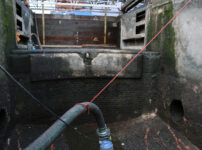 Over this weekend, there's a chance to go down to the bottom of one of London's canal locks, while it is being drained for maintenance works.

Repairing the Locks on the Hertford Union Canal

It is the best of times, it is the worst of times – no not another Dickens 200th anniversary reference, but a description of what it is like to repair canal locks in the middle of winter. Winter is indeed…

A canal boat tour of the Olympic Park

One of the nicer aspects of the Olympic Park is that they have retained the old canals within the grounds of the park to break the space up and provide much needed "canalside frontage" to the luxury houses that will pay for the regeneration afterwards.

Guided tours of the Locks on the Grand Union Canal

During the winter months, several of the canal locks around the country are refurbished, and this year some of them will also have some open-days to let people have a look around while the water is (presumably) drained away. In…

I don’t cycle using my own bicycle as much as I used to, and although I now use the Boris Bikes a fair bit when in the center of town, I do recall some of the basic principles of cycling…

The man who saved our industrial heritage

Today (Thursday) marks the centenary of L.T.C. (Tom) Roltâ€™s birth on 11 February 1910. Who? Well, Rolt was responsible for saving one of the worldâ€™s greatest collections of industrial heritage in the form of Britainâ€™s canal and railway network. He…

The annual Towpath Tidy 2010 is scheduled for 1st to 14th March – where volunteers turn up to help with basic manual labour to clear paths of rubbish or overgrowing plants. Last year, some 1,700 volunteers joined 635 members of…