Repairing the Locks on the Hertford Union Canal

It is the best of times, it is the worst of times – no not another Dickens 200th anniversary reference, but a description of what it is like to repair canal locks in the middle of winter.

Winter is indeed the best of times to do this, because the canals now largely cater to leisure users, who are understandably scarce at this time of year. Sadly though, winter is also the worst of times to repair canal locks as the traditional lime mortars used in brick repair work wont set in cold weather. It crumbles to powder and the bricks refuse to stick together. It’s also less comfortable time for outdoor work anyway.

This winter, the soon-to-be-a-charity, British Waterways is undertaking a £50m programme of works across the canals – including the replacement of the 20 year old gates at the Old Ford Lower Lock near Bow.

The Old Ford Lower Lock marks the end of the nearly 200 year old Hertford Union canal that connects the Regent’s Canal to the Lee Navigation.

With four 2-tonne gates to remove, the Waterways carried out a series of guided talks throughout Saturday, with each group getting to see one gate lifted in turn. 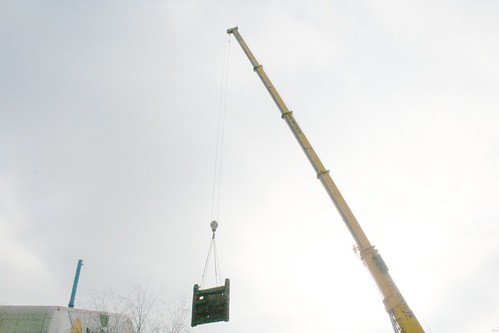 Naturally, when replacing lock gates, you need something to hold back the water while works are under way, and wooden planks have been installed at the upper end of the lock – which is currently holding back ice as well as water. 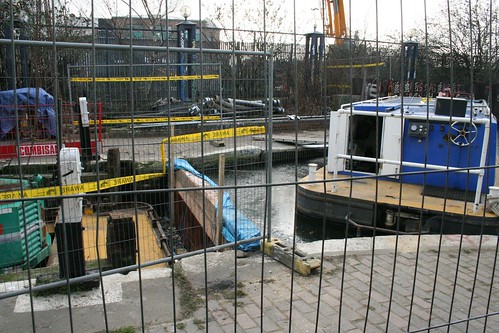 As the gates actually float very slightly when in use, the locks are still flooded at the moment, and tomorrow (Mon 6th Feb), the wooden planks will be installed at the bottom of the lock as well to seal it, and then it will be drained completely.

Draining the lock should also reveal an apparently fairly rare feature — a sediment sump — that may have helped stop build-up of sediment in the lock itself. Not sure if it worked as designed though.

During the rest of this week, the empty canal will be scaffold and the swing gate pots repaired. Next week, remedial repairs and deals will be replaced. The new gates will be installed over a four day period starting Thur 23rd Feb – and the Lock should reopen to canal traffic on the 2nd March.

The lock gate is currently protected by builders fencing, which makes photography through the grill a bit of a pain. Nonetheless, we got a good view of one lock gate being uncoupled from its holdings, then very swiftly lifted up. As it rose, rubbish could be seen falling off the ledges that strengthens the flat gates.

Some gates are metal frames with wooden inserts, and only the wood needs replacing – but these are entirely wood, so the whole gate will be replaced with shiny new models. 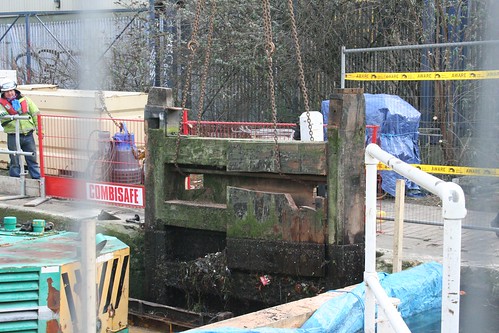 The pedestrian pathway by this lock gate is quite narrow and our small group often stood back to let joggers, dog walkers and prams past. I only recall one person noting our courtesy and indicating thanks as they jogged past though. 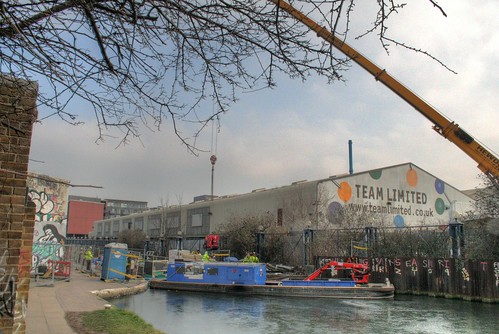 There aren’t any other canal locks in the London area being worked on this winter, but not too far away is the Iron Truck Aqueduct, and that will have an open day later this month.