Published 11 May 2016 by By Ian Mansfield Transport News

For the past few years, vast tunnels have been dug under London, lined with raw concrete, but with 75% of the works completed, Crossrail is now moving into the phase that turns it from a construction site into a functioning railway, the Elizabeth line. While it has been possible to capture the construction phase over the years, what has been done so far is not what people will see when they catch their first trains in Christmas 2018 — and now an exhibition has opened to show off what commuters will in fact be seeing. 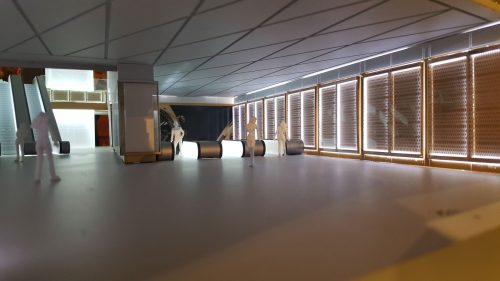 Railway stations are curious beasts. Sitting on a train as it carries us along the line they are the strange lands we do not visit. We peer at them through glass as the person sitting next to us gets up and leaves to who knows where.

Yet, for all that, they are the markers of the journey, the start and end, the building which punctuates how close we are to leaving the train ourselves, the architectural lodestone that tells us we one step closer to work, or home.

We spend time inside trains eyes down looking at paper or phone, but it is the stations that lure the eye away and upward, as a necessity of walking in tunnels and stairs. An entire railway line defined by the two points where we start and end our journey.

They are important, and a well designed station can lift the heart as much as a shabby run-down wayside station depresses the soul.

Crossrail has taken an opportunity not often offered, to not just design a series of new stations but to look at how stations work, and how people use not just the space, but the furniture within them.

It may seem odd to design a new wooden bench, but they did, and tested it — and at the exhibition you can see one, which if you look closely you may start to notice differences between the backs, the arms, the wood, as they tested different designs. 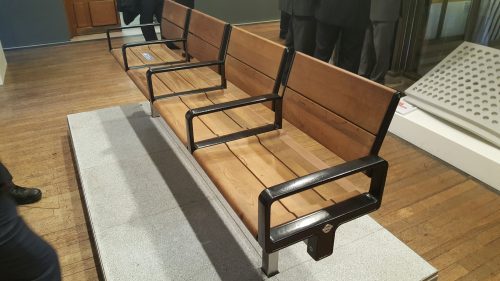 Getting this right today isn’t just about making a seat that looks good, but one that will look good in a decade, and won’t cost much to keep it looking good. Station design has to be as much about functional aesthetics as it is about maintenance costs going forward.

The interface between the corridor and platform won’t be a square edge, but curves around. It looks more organic, eats out precious extra space, but also creates wider visual aspects for people to see around corners when approaching the platforms.

As noted before, fewer sticking out signs, with more built into the screen above the platform doors. Less clutter to distract the eye from the few signs that do have to stand out — the way out.

While much of the signage will have a distinct feel of the Elizabeth line, it still feels correct for a London Underground service, with the correct font and general styles followed, but also subtly updated.

The central stations tunnelled out in tubes will be instantly familiar as tube stations, but on a vastly larger scale. They will also all follow a similar design. Not for Crossrail different designs for each station as on the tube, they want a consistent brand at the platforms, which slowly loses its grip as the passenger rises up to the surface, where, of necessity, each building has to be different. 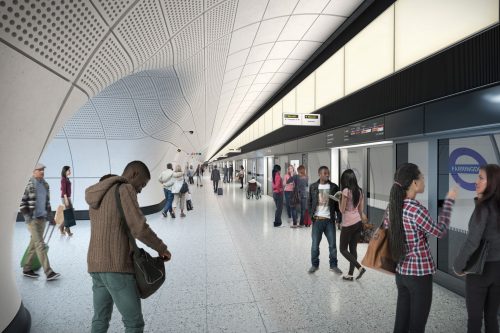 Each of the new stations will have its own, distinct character, conceived by different architects and each will reflect the environment and heritage of the local area. For example, the new Elizabeth line station at Paddington will echo the design legacy of Brunel’s existing terminus building, while the new Farringdon station will take inspiration from the historic local trades of blacksmiths and goldsmiths, as well as the distinctive architecture of the Barbican.

When Crossrail opens, it will be at once familiar, but refreshed. As Crossrail has used the opportunity to make use of the latest understandings in crowd behaviour and human activity when designing stations, those learnings then seed future design changes elsewhere.

The exhibition put on by Crossrail looks at these issues, how different wall and floor surfaces work. The ‘Platform for Design’ exhibition will give an insight into the design of the new railway, its stations and the public spaces outside the stations, where people linger waiting for buses or friends.

It’s an exhibition of large display boards, and physical objects, such as the curving wall that will cover the inside of the tube-shaped stations, to the detailing to be used on the roof at Liverpool Street. 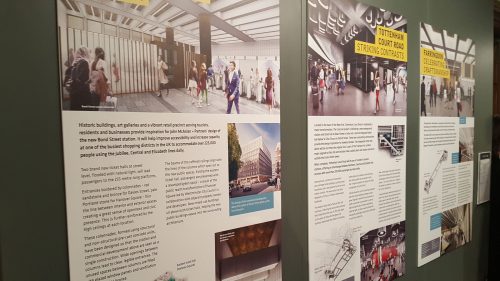 Also on display are the glass cases which to be frank will probably occupy most of the visit — scale models of a number of the stations, from a huge model of Paddington to a smaller chunk of Custom House. 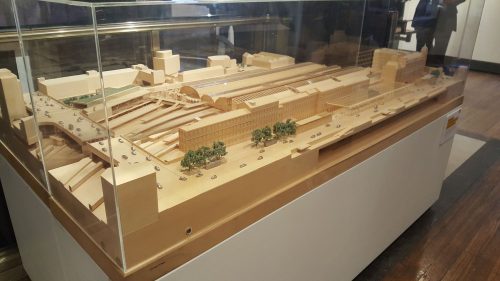 However, all too easy to overlook, is a small black book. Find it — for inside are drawings, of early station concepts long before the final designs were agreed. 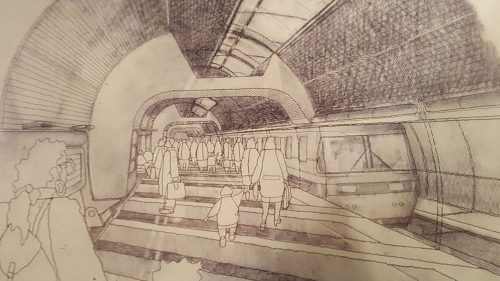 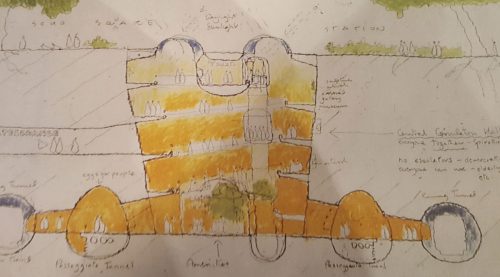 Some almost science fiction designs, and if you look carefully, even in these very early drawings, there’s already a mention of Crossrail 2. 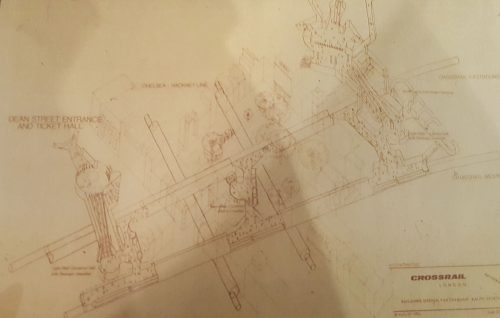 The exhibition is open now, on the second floor at RIBA — open 7 days a week and late on Tuesdays. It is open until 14th June.