Earlier this morning, something happened that hasn’t been seen for over 65 years – a tube train left Waterloo and arrived at Bank, carrying passengers.

Yes, to help cope with the deluge of passengers for the Olympics, the Waterloo and City Line will run on Sundays – something it hasn’t done since 1947, at which time it was still owned by British Rail and was not formally part of the London Underground.

You could therefore technically say this was the first time that Sunday services have ever been offered by London Underground. Technically.

Even when British Rail owned it, the Sunday service was short lived, running from 7th March 1943 to 23rd Feb 1947.

Over the next few weeks, it will act as a damn useful way of diverting passengers if necessary between crowded DLR and Jubilee Lines – and this morning, the usually empty Jubilee Line was almost as busy as a normal mid-week commute, albeit with excited families waving flags replacing glum looking commuters reading The Metro.

The very first train to leave Waterloo on a Sunday since February 1947 departed at 8am, and a counterpart left Bank at 8:02am

Obviously, being a sad tube geek, got to catch that very first train!

Arriving just 10 minutes before the train was due to leave, and the ramps down to the platforms were still closed, which caused a momentary worry until a member of staff turned up and started opening them for passengers. Well, this solitary passenger so far. 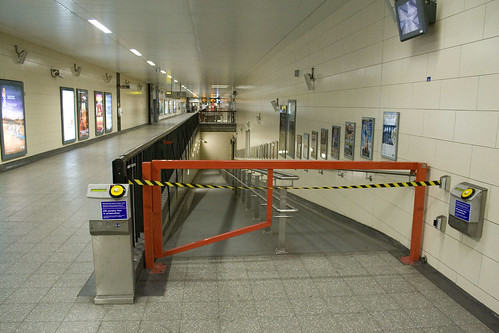 An empty platform greeted me, but it wasn’t long before other people started to come down to catch this very first train, all with the look of bored commuters not sadly excited train geeks. 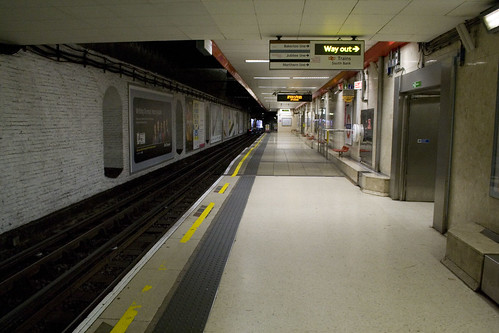 A train could be heard pulling into the other platform, and then into the depot to wait a moment, before pulling into our platform for its maiden Sunday journey.

A quizzical glance from the train driver at my photographic antics as he pulled in, but he excelled by using the tannoy to welcome people to the first ever Sunday service to Bank station. Not that many people seemed to notice. The woman in my carriage seemed far more interested in her phone, and the chap looked like he probably wanted to be back in bed. 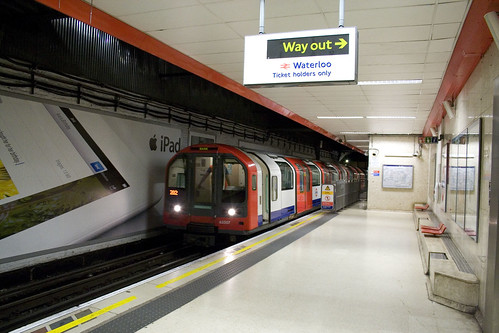 At Waterloo Station, I didn’t see any signs indicating that the train was running this morning, so I was slightly surprised at how many people were using it. Then again, I came via the Jubilee Line, and maybe the signs were by the other entrances. 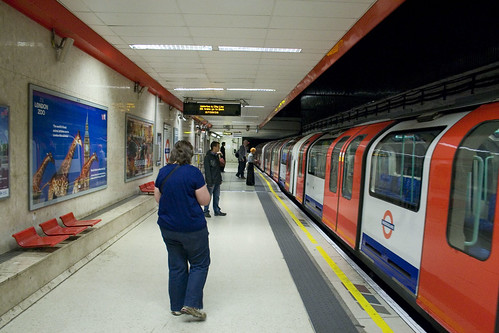 Certainly at Bank station there is signage letting people know that the service is running. 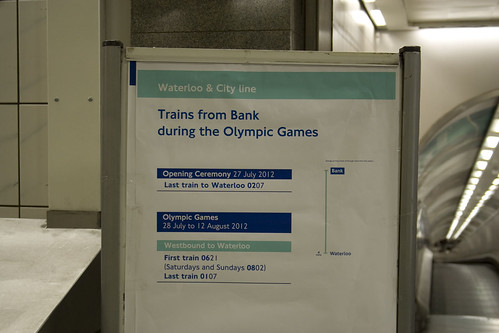 And some more makeshift sticky labels… 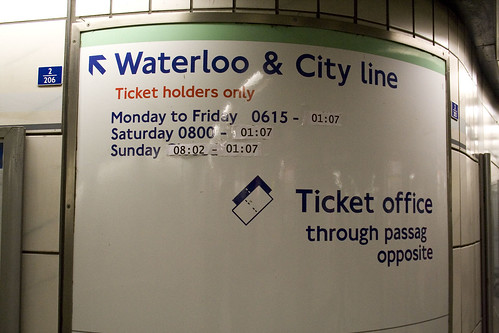 Regular users might notice the late closing of the service. The trains normally finish just before 10pm during the week, but are now running until 1am.

Opening the service on a Sunday is a rare piece of good news about how the Olympics are affecting the transport network, and while it certainly wouldn’t be viable to run on Sundays normally – can I please beg them to open it when either the DLR or Jubilee Lines are closed at weekends. During the past few years of upgrade works on both lines, the W&C line would have been a boon to travellers.

At the very least, it’ll be interesting to see the passenger numbers tally change on this page from zero to something higher.