Starting from next Monday (4th July), Victoria line stations will be showing video clips in a 1960s spy movie style as part of the Art on the Underground.

The new video commission from artist Liam Gillick, titled ‘McNamara ‘68’evoke the spy movie genre of the 1960s with the films focusing on the original architectural details of the Victoria line.

Gillick has created 16 short films featuring footage shot by the artist for the digital screens across London Underground. To accompany the films, a series of posters will be displayed across all the stations on the tube network.

Together the works act as short film trailers for a possible movie. The clips introduce the “stars” of the potential film, with one per station. Each star is an anagram of a station name.

Whether the stars match the stations or not is something for the travelling public to work out.

The video art is part of Underline, a series of art commissions across the Victoria line in 2015 and 2016. 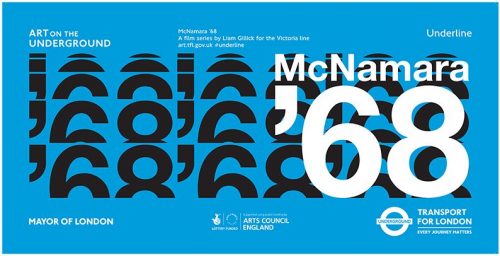