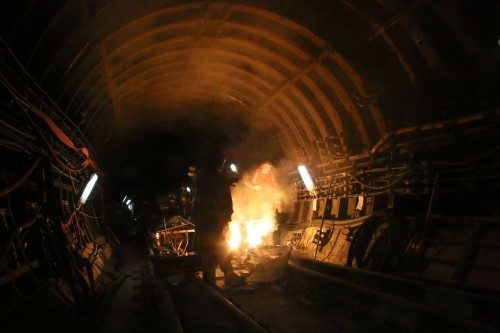 A planned £1 billion Crossrail 2 station in Chelsea could pay for itself within 20 years through a surge in stamp duty revenues, a study claimed, Standard

A group which campaigns to preserve the best of the 20th century’s architecture has called for Waterloo International Terminal to be given listed status. SE1

‘Simply getting on a train is a struggle’: Southeastern and Southern trains ranked joint worst in the UK NewsShopper

Rail operators plan to go after fare dodgers over the summer, teaming up with transport police to catch those responsible Sharecast

Engineers working on improving the railway line between London and Southend have a new way of working – to protect badgers. ITV

The HS2 high-speed rail project has an “unrealistic timetable” and faces major cost pressures, a report by the National Audit Office has said. BBC News

And finally, The least used station in… Hertfordshire DiamondGeezer

The image above is from August 2015: Photos – rebuilding a Victoria Line crossover junction