Next Wednesday (6th July) is a chance to watch a radio-active dinosaur terrorise the English coast and head up the Thames to rampage through London.

Marine atomic tests have caused the resurrection of a long dormant ‘dinosaur’, and like all prehistoric beasts, it’s angry at being woken up. 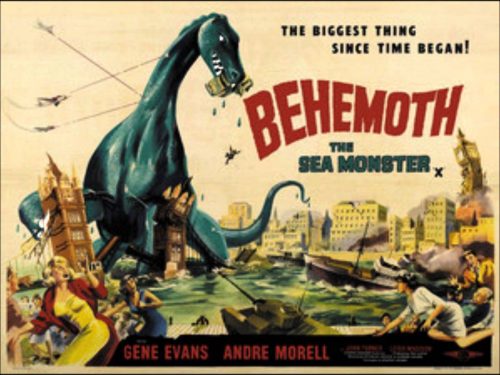 Join historian of biology and film-buff, Professor Joe Cain, as he presents the classic British-American sci-fi hit, The Giant Behemoth.

SEE the Beast that shakes the Earth! LIVE in a world gone mad! WATCH the chaos of a smashed civilization! FLEE from the mightiest fright on the screen! NOTHING so Big as Behemoth!

Prof. Joe Cain returns to the Grant Museum to shares his love of this cult classic in his LAST EVER film night. Expect an introduction about the film, some media studies insights, and laughs a plenty as a rubber model on a budget terrorises bad actors.

The film will be shown in the J.Z. Young Lecture Theatre, on the other side of the road from the Grant Museum, and is followed by a free wine reception at the museum.

This event is free and pre-booking is not available, but to avoid disappointment arrive early, doors open at 6pm.