The London Library is claimed to be the largest lending library in the world, and yesterday I joined some friends in having a tour of the place. It is set in a fairly small looking building in the rarified atmosphere of St James and Pall Mall, but appearances can be deceptive.

Despite its posh location, this is no fancy library but a very real functioning building – and the slight frontage conceals a vast building behind it.

We joined a regular tour which they hold on the last Saturday of the month for interested people and prospective members, for unlike most libraries in the UK – this is not state-funded and hence has an annual membership fee to be able to use the building.

The library itself was originally founded in 1841 by (amongst others) Thomas Carlyle, who was dissatisfied with some of the policies at the British Library. The library has been based at 14 St. James’s Square since 1845, having originally occupied the first floor of the Travellers Club at 49 Pall Mall. The library, therefore, predates the 1850 libraries act which obliged local councils to set up community libraries for the general populace. 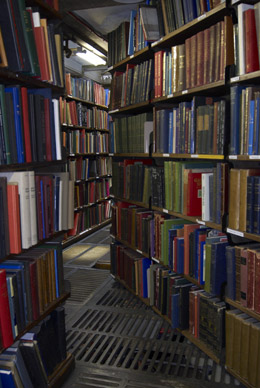 The most amazing thing about this place though – is the miles upon miles of book shelving, and unlike reference libraries where you order a book and it is delivered to your desk – here the members browse the bookshelves themselves quite freely. This offers the almost unique feature of serendipitous discovery – where you go for one book and notice sitting next to it is another which you didn’t know about but is also useful for your researches.

As someone who spends hours sometimes just browsing around archive files on the internet and often find things by accident that way – I can really appreciate how this ability to browse the bookshelves is hugely useful to the membership.

The main part of the building is some 7 stories high, and there are wire framed floors in places where you can see right through from top floor to basement, and there is a second wing of similar size followed by a new extension under construction. Over a million books are on these shelves – and they aim to allow around 97% of them to be taken home to be read.

There is a quite marvellous atmosphere in the book stacks as they are very narrow and there is the delightful all-pervading smell of old books throughout the place.

It’s not a building to visit for the building itself – it’s a place to visit to experience the amazing atmosphere of a literary gem in the heart of London.

They have a digital database as well, and include tons of journals – alas the scientific ones which interest me are not part of their remit, otherwise, I would probably find it cheaper to join the library myself than pay for each document I need from JSTOR etc.

I originally heard about the library after a mini-scandal last year over a sharp hike in the annual membership fee to Â£375 per annum – and I was reminded of the tours by a mention in The Londonist.

Even if you are just going for a look and don’t actually plan on joining the library itself, anyone who reads a lot will love a tour of this quite remarkable institution.

Update – Had an email from the Library letting me know that their JSTOR access actually includes the entire catalogue, which makes it much better for me. Also, a friend who was on the tour went back the other day on a daypass ticket.

1 Pings/Trackbacks for "The London Library"