TfL style contactless touchpoints are arriving at Windsor and Eton station as contactless payments for train tickets, already valid on GWR and TfL Rail services between London Paddington and Reading are being extended onto the Henley and Windsor branch lines.

A mainline rail line in West London will take part in a trial later this year, replacing its existing fleet of diesel trains with former London Underground trains that have been converted to run on batteries.

The latest of the stations to be upgraded ahead of the Elizabeth line opening has been completed, to the west of London at West Drayton.

Captain Tom Moore gets a train named after him

Great Western Railway (GWR) has named a train in honour of the veteran who has raised more than £29 million for the NHS to mark his 100th birthday.

Southeastern and GWR get franchise extensions

Two train companies, GWR and Southeastern have had their franchises extended after the government made a direct award contract to the two operators.

GWR is offering a January sale with train tickets from as little as £5, for travel between 23rd January and 3rd April 2020.

A new modern speed record has been set for a train running between Bristol Temple Meads and London Paddington of just 1 hour and 12 minutes.

Prices announced for the Didcot to Oxford Railway’s 175th Anniversary

This year marks the 175th anniversary of the railway between Oxford and Didcot, and they’re having a special day of celebrations on 15th June 2019.

Tickets Alert: Ride the last ever passenger Intercity125 out of Paddington

Next month, the last ever passenger service HST will leave Paddington, and you can be on board.

Here's an odd thing for sale, and hence, for some people, utterly desirable -- boxes of unused destination labels used on Intercity 125 trains.

Events to mark the Didcot to Oxford Railway’s 175th Anniversary

This year marks the 175th anniversary of the railway between Oxford and Didcot, and they're having a special day of celebrations on 15th June 2019.

Over the past few days a steady stream of curious locomotives have been seen on the railways heading towards London. Coming together to mourn the passing of a mighty railway depot.

This Saturday (2nd Sept) will be a rare chance to go onto the site of one of London's larger railway depots, to mark its eleventy-first birthday.

This coming September will be a very rare chance to go onto the site of one of London's larger railway depots, to mark its eleventy-first birthday. 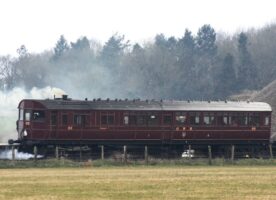 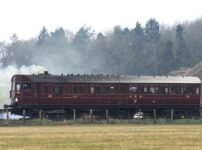 Imagine a steam train without a locomotive -- one where there is seemingly no form of propulsion save the telltale hint of a wisp of steam from the roof.