London Transport Museum’s storage depot in Acton is throwing open its doors for a few days in April for visitors to explore the Museum’s century worth of transport posters, as well as the rest of the depot.

The Acton Depot, where the London Transport Museum stores most of its trains, buses and ephemera is having a week-long Half-Term opening for families.

The Acton depot which houses the bulk of the London Transport Museum's collection could need to be rebuilt if plans to redevelop the site for housing go ahead.

For one weekend this April, London Transport Museum’s Depot in Acton, west London, will open its doors, giving you the chance to explore its huge collection of transport heritage.

A huge shed packed full of old tube trains, buses, trams, and floors of railway ephemera, this is the Acton depot used by the London Transport Museum to store everything that wont fit into the museum. 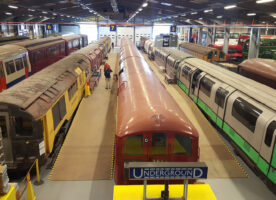 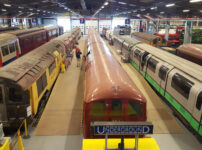 Details of this spring's opening of the Transport Museum's Acton depot have been announced, giving people a chance to go into the overflow site which is only open three a year.

A train that hasn't moved for nearly 50 years could be about to make a dramatic return to the London Underground -- the Q-Stock is returning.

This weekend is a chance to go inside the Transport Museum's overflow depot at Acton Town, where they store all the goodies that would never be able to fit into their Covent Garden base.

Later this month there will be an occasional open weekend at the Transport Museum's overflow depot at Acton. 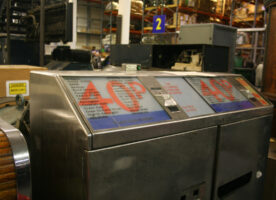 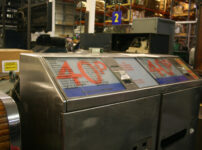 This weekend will mark the occasional opening of the Transport Museum’s overflow warehouse out in darkest Acton, and if you haven’t been, then it is worth a trip. To the depot that is, not Acton. Basically, a former train shed…

Another outing for the iconic restored 1938 tube train – this time on a Friday evening along the District line. This weekend (29th/30th Aug) the Upminster depot is open to the public for its 50th anniversary, and the 1938 train…

Yesterday was one of the periodic opening at the Acton Depot, which holds tons of kit that can’t be fitted into the Transport Museum’s Covent Garden venue.Â  This weekend was themed around miniatures, so the place was also manned by…

Just a tip – if heading over to the periodic open weekend at the Acton Depot this weekend, you would be strongly advised to try and get tickets from the Covent Garden museum before heading over to Acton as the…

Went off the to the Transport Museum this morning – not the one in Covent Garden, but the reserve store at Acton Town. Met up with a fellow transport geek and we went in, and thanks to a warning from…