According to this week’s issue of The Railway Herald, the London Transport Museum has gained a mundane, yet also quite special tube train to add to its collection at the Acton Depot.

The train is a bulk-standard 1967 stock train from the Victoria Line, which is being phased out as the new trains come into use on that line. What makes it a bit special though is that it was also the very same unit used when The Queen opened the Victoria Line in 1969.

She got to ride in the drivers cabin from Green Park to Oxford Circus, then used in the more normal passenger seats on the return trip.

The train – number 3052 – has apparently been nicknamed the Royal Train ever since.

If you want to sit in the same seat as Her Maj, then the Acton Depot will be open to the public later this month on the 26th and 27th November.

A rather fun video clip about the official opening, and how the Royal Hand picked up her personal train ticket is on the Pathe News website. 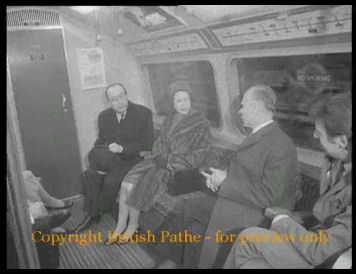 As noted in the video clip, this was the second time The Queen had been on a tube train, but a letter to the Mail on Sunday reveals an interesting anecdote about that first trip, back in 1939.

What was not made public was that their grandmother Queen Mary was horrified when she heard and reprimanded ‘Crawfie’ severely, telling her that Royalty should not mingle ‘so intimately with subjects’.

Incidentally, although the Queen officially opened the line in March 1969, it had already been running between Walthamstow Central and Highbury & Islington since Sept 1968, and later that year down to Warren Street. Princess Alexandra opened the later Brixton extension in July 1971.

I wonder what it happening to the other trains – I wonder if this office complex needs an extension?