Published 19 September 2011 by By Ian Mansfield Events and Tours

Regular users of Victoria mainline train station may have noticed the presence of a tall brick chimney on the western side of the train tracks next to the river and maybe pondered its function.

It is indeed a chimney – and was part of the apparatus that drove huge steam engines in the ornate building next to it – in order to pump sewage from West London over to the east to be processed (a bit) before being dumped in the river.

Not as famous as the terminus of the great sewers at Crossness or Abbey Mills, it still forms a vital, if initially unexpected function. 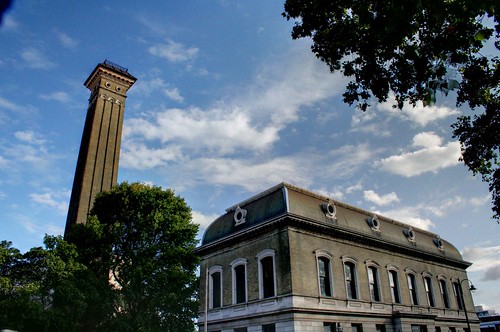 Fortunately, Thames Water decided to let people in for a look around. Unfortunately, they had a ban on photography, which is a huge shame, as it is very industrial and fascinating to see.

Originally, there was going to be a sewerage plant at what is now Chelsea football grounds, but an outbreak of Cholera in the area killed off those plans as fast as the bacterium killed humans, and they extended the underground sewers towards Westminster in order to carry their waste over to the East of London.

The sewers were designed to run by gravity, so as the Western sewer arrived at Victoria, it was now below the top of the rest of the network – hence a pumping station to lift the effluent upwards by some 21 feet and let it continue its gentle downward slope (2 feet per mile) towards East London.

Originally powered by six Cornish boilers, and later 4 Lancashire boilers, the main building contained four high-pressure condensing beam-engines of an aggregate of 360-horse power. The rather grand supervisors house is now an office, and the original coal store and docks are now posh houses.

However, the main building remains, as it is still needed today to lift all that muck up from one tunnel to the next.

Sadly, but understandably, the Victorian beam engines are long since vanished – as in 1936 the whole lot was ripped out and a far more powerful set of four diesel engines installed – along with replacing a four story deep “pond” underneath with sealed off pipes and valves.

Going in to the building, it is essentially in two halves. The back is the boiler room, with just two boilers remaining, but long since disused. A lengthy talk about them from the guide, who also works as a volunteer on steam trains, so he slightly baffled some of us (OK, me) with talk about steam pressures and pumping rates and the like.

Through a narrow brick corridor and into the other half of the building, and now we were one story down, and looking down a deep pit that was at least four stories deeper to the base — and probably a couple deeper below that — which was filled with vast pipes, two huge black drive shafts and a lot of valves.

When built, it was understood that there would be times when there was more water coming into the pipes than they could cope with. Incidentally, about 80% of the waste is just rain water — even on dry days — but a heavy rainfall can overload the system, so it was designed to dump the surplus into the river.

That dumping of sewage into the Thames is not a modern thing but was originally designed into the sewer network. Although population increases means it happens more often than originally expected.

As it happened, the CEO of Thames Water, Martin Baggs was on the first part of the tour and gave us a bit of promo about the huge Tideway tunnel the company says it needs to build to cope with the demand and cut down on dumping sewage into the river.

He left, we stayed, and carried on up a flight of stairs to stand on the ground floor of the main ornate, Grade II listed brick building.

This is where the beam engines would have stood, and anyone who has been to Crossness will remember there is an upper floor with beam engines upstairs and fly wheels below. This building was identical.

Now though, the upper floor was taken out in the 1930s, as were the beam engines, and three (was four) diesel engines sit in the cavernous hall.

These are themselves 75 years old and the only working variants of their sort in the world, so while Victorian heritage is lost, what is here today is itself still very historic – and indeed, these diesel pumping stations are probably rarer than the Victorian beam engines which tend to be preserved unlike their newer replacements.

There were four engines, but one eventually died and was replaced with an electric equivalent.

One girl had the chance to switch the an engine on, and as the cover was lifted, we could see the mechanical action banging away to generate rotative power than then drove the huge drive shaft downstairs and sucked up that morning’s bathroom activities from across West London.

The diesel engines bang and vibrate — and talk — in a way that the nearly silent replacement electric engine cant, and the engineer said that simply by feeling the vibrations and listening to the motor he can tell exactly how the machine is performing.

There is something compelling about seeing energy converted into mechanical movement by the use of a vast machine with lots of wheels and gears and motors. An electric engine is more efficient, but lacks something tangible in how it turns power into motion.

Some people were sneaking photos, so I did as well. 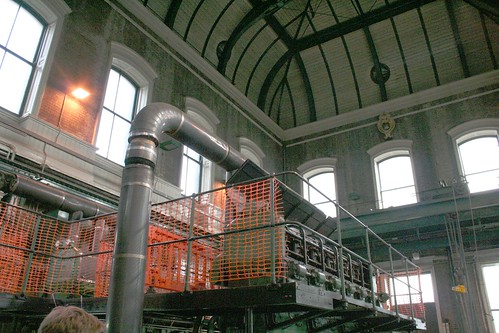 A quick look outside down a drain into the sewer itself, and the tour was over.

An interesting insight into a less well known aspect of the sewer network. You can theoretically climb the tower – but they weren’t letting us do that!

I was also due to visit Abbey Mills, but the Open House website swallowed my booking requests and spat out something so utterly different from what I asked for that I lost the booking – and now that Diamond Geezer has pointed out that the tour unexpectedly included the Victorian building as well as the modern one, and the archives, I am extremely irked.