Opened at the tail end of 2008, the bus garage at West Ham claims to be the largest single bus depot in the UK – and as is increasingly common, one of the most environmentally friendly. The distinctive green roof and wind turbine offering visual hints as to why it claims that title.

As a modestly curious fan of green roofs, I took the opportunity for a closer inspection this weekend.

Situated next to the recently opened DLR extension, it also afforded the chance to use the new extension as an actual passenger instead of the fuss on the opening day.

The bus garage itself was built on the site of a former Parcelforce depot and replaced an older bus garage to the north of the Olympic site which was needed for, well, the Olympics – and later regeneration of the former industrial landscape in a distinctly non-industrial sphere.

Created out of four large metal arches, the new bus station is oddly reminiscent of the 60 year old station at Stockwell, but unlike subsequent buildings, has a lot more light allowed inside so it isn’t as gloomy.

A talk by one of the architects went into some detail about the heritage of the site (I photographed a few of the slides) and the design of the site. Although obvious in hindsight, I hadn’t really thought about bus garages as being noisy in themselves. However, their peak hours of operation are really from 7pm-11pm and 4am-8am, which is not ideal if you a based next to a future residential site.

The future residential site to the north was supposed to be part of a much larger residential regeneration for the area, but then London won the Olympic bid and a new home had to be found for the bus garage. Apparently the council were quite annoyed.

For that reason, the open air bus park is to the south of the main garage away from the future housing, and the north side of the garage itself is filled in with offices, so their conventional 9-5 working hours wont disturb people.

Inside the offices, it is a very spartan design with exposed concrete everywhere. A deliberate design, as the concrete acts as a cooling agent by absorbing warmth during the day without the need for air conditioning. Sound baffles around the light fittings help absorb office noise that would otherwise bounce off the harsh wall surfaces.

The green roof is designed to absorb water, and slowly release it to the drains, which in turn use the water for flushing toilets. A concern about is viability meant they dropped plans to green the whole building, but the roof works quite well, and it is a bit late to cover the remaining two arches as well.

A recent wind turbine adds to the green credentials, and averages about 10% of the total electricity consumption, although it has spiked right up to supplying almost all their electricity needs at times. It was switched off when we visited due to a fault.

The garage is predicted to cut CO2 emissions by 27 percent compared to a building built with traditional materials. The slide in the earlier talk showing how many tons of CO2 were saved compared it to how many car journeys were saved – which seemed to be an odd analogy for a bus garage to use. I would have wondered how many “free” bus trips it generates.

Although the arches are evidently steel based, the wooden struts soften the effect a bit, as does the detailing at the bases of each arch. The gaps at the base of the outer arches might add to the light and ventilation, but they are cursed by the motorbike owners who have to park there when it is raining. 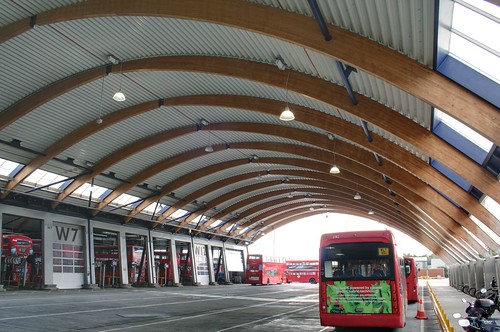 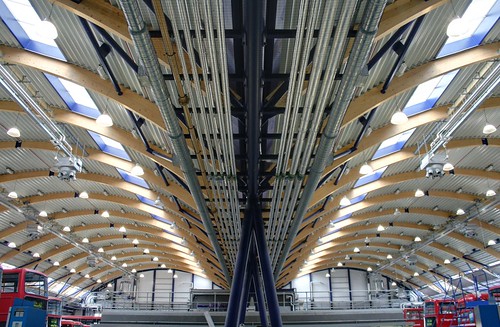 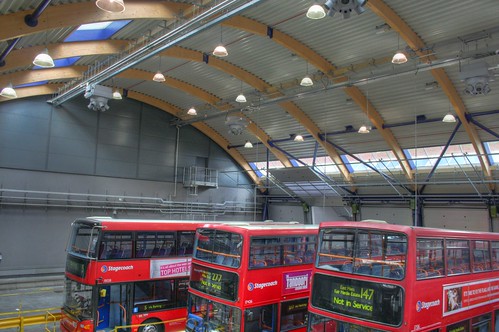 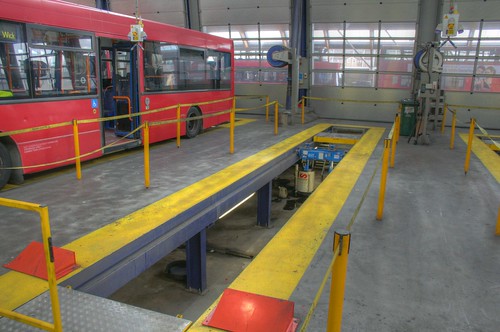 I was more interested in the architecture than the buses, and was pleased that the tour was resolutely building based.

A display of one of each of the buses used by the operator finished off the tour, and while I was waiting, a bus-geek came in to complain that one of the signs wasn’t quite correct. 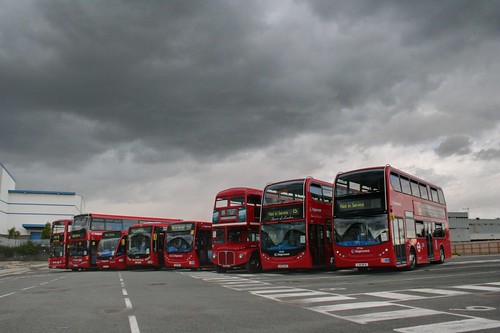 More photos of the site over at the gallery.

The building is owned by Transport for London, leased to the bus company and cost £30 million to build.