A new pedestrian bridge is being planned for one of the docks in Canary Wharf to relieve congestion on the existing South Quay Footbridge (also, if very infrequently, known as the Wilkinson Eyre Bridge). 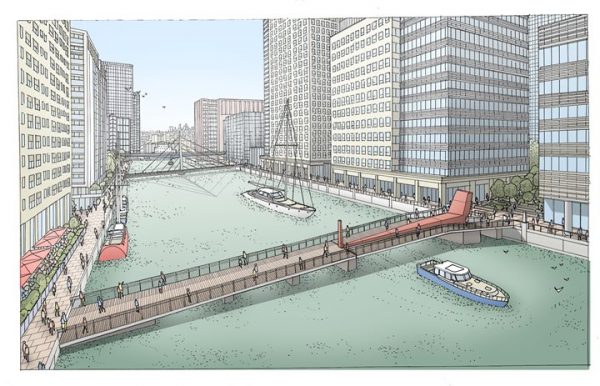 The Council’s proposed bridge location aligns with Upper Bank Street and has been selected following the assessment of different locations. The chosen alignment will enable new and existing residents, and other users to better access transport links such as the Jubilee Line and the new Elizabeth Line stations, retail shopping and town centre services in Canary Wharf.

At the moment, 27,000 pedestrians cross the existing bridge every day, the second busiest in London, and it will no longer be able to handle capacity within 3 years, hence the need for another bridge nearby. Also, the new bridge will be easier for cyclists as it wont have steps on the north side.

Tower Hamlets Council has agreed an expenditure of £270,000 for preparatory work, including work on the initial design and consultation to progress the South Dock Bridge Project. The Council has also committed Community Infrastructure Levy (CIL) funding to the next phases of development and intends to make a further contribution towards the delivery of the bridge at a later stage.

A feasibility study undertaken over the last three years estimated that the new bridge will have the London’s second highest pedestrian use – second only to the Millennium Bridge in central London.

A consultation has now opened, and will run until 23 March 2018 – you can read that document here