The Night Tube service will resume on the Jubilee line this coming Saturday (21st May), although there will be fewer trains per hour than planned due to RMT strike action.

As they had threatened to do, the RMT union has expanded its ongoing Night Tube strikes to include the Jubilee line.

Night Tube to be restored to the Jubilee line next month

The Night Tube, which currently runs on the Central and Victoria lines will be joined by the Jubilee line from the evening of Saturday 21 May 2022.

Had it been built, there would today be a tube line running between Victoria station and Kilburn, and could have altered the route of the Jubilee line.

People have been using it for over 20 years, and although it opened in 1999, in a way, Bermondsey station on the Jubilee line can be said to be still unfinished.

The Bakerloo line extension is likely to face a lengthy delay due to the ongoing financial problems at TfL, according to their latest financial forecasts.

A large plot of land that's been empty ever since the Jubilee line extension was built 20 years ago is finally going to be built on again.

The eastern half of the Jubilee line now has mobile phone coverage in the tunnels and stations, after the first phase of a network rollout was switched on.

More trains on the Jubilee line between Nth Greenwich and Stratford

There will be fewer trains terminating at North Greenwich from later this month when a new timetable is introduced on the Jubilee line.

There's a chance next month to visit a part of the Jubilee line rarely seen - the overrun tunnels that run beyond Charing Cross station towards Aldwych.

Last September, a Jubilee line train was driven at over 60km/h between two stations with its doors open in several carriages, a report from the Rail Accident investigation has found.

Go into the disused tunnels at Charing Cross tube station

In the 1970s, to help dig the new Jubilee line at Charing Cross, a series of long access tunnels had to also be dug -- and they're still down there, empty and abandoned.

It’s the 40th anniversary of the Jubilee line opening

It opened two years late and they changed its name halfway through building it, not the Elizabeth line -- this is the 40th birthday of the Jubilee line.

Buy a bit of an old Jubilee line tube train

The Jubilee line trains are being refurbished at the moment, and some bits of the old trains are coming up for sale.

Tube strike – CANCELLED – on the London Underground this Thursday

There is a planned tube strike on the London Underground tomorrow (Thur 14th June) that is expected to completely shut-down the Jubilee line.

Tube strike could knock out the Jubilee line on Wednesday

A tube strike planned by RMT and ASLEF members this Wednesday (6th June) is likely to totally eliminate the Jubilee line, although a threatened walkout on the District line has now been cancelled.

A new western side entrance to Stratford station has been approved, which will see easier access to the station from the side streets to the north of Stratford High Street.

Turns out, there's an old TV programme about the construction of the Jubilee Line Extension that's been lurking on iPlayer for however long.

One of the more famous local landmarks that can be found in the hipster-central that is Shoreditch are four old tube trains sitting up high on the remains of a disused railway viaduct.

The Jubilee Line is set to get an upgrade that will see the number of trains running through the line during the peak times rise to 36 per hour by 2019. At the moment, the peak rate in 30 trains per hour (tph). 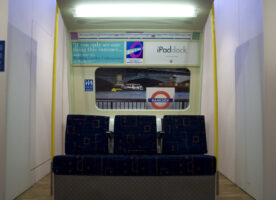 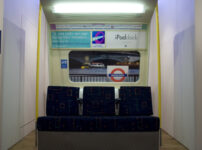 It's not often that you see a bit of a tube train inside an art gallery, but that is what you can see for the next couple of weeks in a small gallery next to the vastly larger Tate Modern.

Thoughts about the Acid on the Jubilee Line

Part of the Jubilee Line is to be closed between Finchley Road and Waterloo for repairs over the next two years due to acid eating into the tunnel linings.

In 1879, the Great Eastern Railway opened a new fruit and veg market at Stratford which gave its name to the local Stratford Market train station. Connected to the local railway, it had 12 sidings to service the market. In…

Another upgrade for the Jubilee Line completed

Monday should see the final stage of the long running signalling upgrade on the Jubilee Line come to completion, as the line starts running close to its theoretical peak rate. Last August, the network upgraded from running 24 trains per…