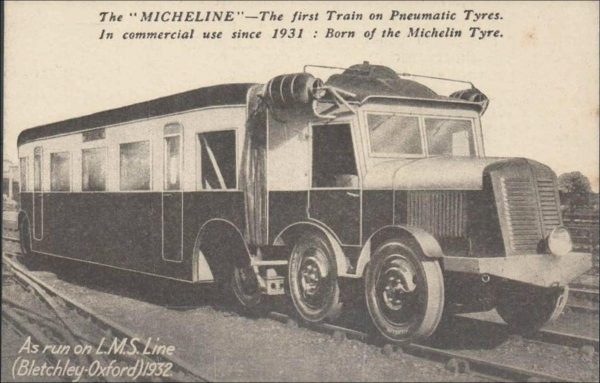 The short-lived experiment with rubber tires on railways

A woman has been seriously injured after being dragged along a London Underground station platform by a Tube train. Independent

Complaints have been launched after it was announced an underground station lift would not be fixed for five months. Local Times

London Underground tunnels could soon be carrying a super-fast broadband internet service, if plans being worked on by TfL come to fruition. IanVisits

The Mayor of Watford has revealed an extra £40million could be needed for the Met Line Extension to still go ahead. Watford Observer

Video footage has emerged of an accident at Farringdon Station which saw a worker dragged down a hole during tube maintenance work. Construction Enquirer

It’s been a bit over a year since the Night Tube launched, and a report by TfL has looked back at how it went. IanVisits

Work has started to stabilise a railway embankment in Streatham, to reduce the risk of a future landslip after monitoring equipment confirmed it is subsiding. RailPro

The frustration felt by passengers when major engineering projects disrupt services poses a headache for the HS2 project, according to a watchdog. Times & Star

A 48-hour strike on the DLR is to go ahead after talks failed to resolve a dispute over claims of a breakdown in industrial relations. BT

A sculptor has told how he risked his life to save a man who was trying to commit suicide on the Tube. Evening Standard

£680,000 project to make maintenance more effective on the railways EurekAlert

After 15 years of running the Bree Louise pub in Euston – the owners handed over the keys – to make way for the HS2 development. London Live

A man with a “machete” was arrested after allegedly assaulting a police officer at Hitchin train station. Herts Mercury

Transport for London and Network Rail have teamed up with industry institutions to launch an initiative to slash the number of disputes in construction. Construction News

And finally, a verbally abusive cyclist who narrowly avoided death by lifting his bike over a railway crossing barrier and trying to cross the tracks has been caught. Local Guardian

Image above is from Dec 2013: The short-lived experiment with rubber tires on railways