The short-lived experiment with rubber tires on railways

For all their design innovations, railways still retain one fundamental weakness — they put metal wheels onto metal tracks.

Not just inefficient as there is limited grip between two such smooth surfaces, but noisy as well. So why don’t they use something different? It won’t surprise you to learn that railway companies have tried. And sadly failed.

It’s mainly a Frenchman we have to thank for the best attempt to deal with the metal upon metal, and that was tire magnate, Andre Michelin who upon returning from an unpleasant train trip instructed his engineers to develop something better.

Unsurprisingly for a tire manufacturer, they came up with a tire for railways. 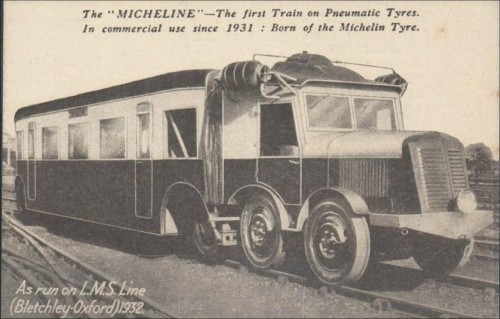 The special pneumatic tyres, fitted with metal flanges in order to keep the coach on the rails, had a wooden hoop inside them so if they punctured, they only deflated slightly to prevent derailment.

At the time it was claimed that this type of tyre had an adhesion three times greater than steel wheels, and so the test trains could accelerate faster and brake later than conventional steam trains of the era.

The pneumatic tires absorbed shocks and bumps, and were considerably quieter in use — a boon it was said for passengers, but surely also for people living near to the railways.

It also didn’t take too long for someone to think that if trains could run on road tires, why not combine the road and rail vehicles into one. And thus the Micheline Railcar was born — basically a bus that ran on railway tracks.

Quieter than steam with its diesel engine, it could also be started up faster than a steam locomotive and didn’t need trained operators to handle it. Anyone able to drive a bus could manage the Micheline.

Tests were carried out in France, but in 1932, a Micheline Train was brought to the UK for evaluation. It was tested by the LMS on the line between Bletchley and Oxford, but did not prove to be a success.

There were other attempts — the Coventry Pneumatic Rail-Car, built by a Coventry car manufacturer for example. Which did have the advantage of looking exceptionally sleek as well.

Despite all the claims at the time of long life for the tires, they did wear out quickly, and also where a train carriage of the time needed just four wheels, a comparable carriage fitted with pneumatic tyres could need as many as 20 wheels.

The extra cost of building the carriage, and the ongoing maintenance meant the concept was doomed. It was the wrong sort of wheel on the tracks.

On the 30th November 1951, a debate in Parliament asked why defunct railway lines couldn’t be bought back into use by combined rail-road trains, but no one seemed interested anymore, and the Beeching Cuts would have probably killed the idea off anyway.

So to this day, we put up with steel on steel, and the inherent weakness that entails.