If you had been willing to get up at an ungodly hour, then you could have seen a rather impressive bit of civil engineering take place, as a large set of Olympic Rings was hoisted up to the top of Tower Bridge to herald the forthcoming sporting event.

When I first heard that they wanted to put some rings on the top walkway, I had presumed a modest-sized sign mounted on the walkway itself – but what we have actually got is a huge sign that will hang down from underneath the walkway.

To raise the sign from the river and secure it required the river in the area to be closed off from 2am-9am, and the Bridge itself closed from 4am to 4pm. With a tip from a Bridge manager and some experience of such things, I arrived at 5am to settle down for what I hoped would be just a few hours.

The roads approaching Tower Bridge were closed when I arrived, and some pedestrians and cyclists thinking the road closure didn’t apply to them still proceeded along the road only to be turned back by yellow-jacketed stewards.

Settling into place on the nearby pier, the barge was already in situ when I arrived, and some cables could be seen hanging from the top walkways. As I understood it, the cables would be lowered to the scaffold holding the Sign, and then it would be hoisted upwards.

Which I am pleased to say is exactly what did happen. 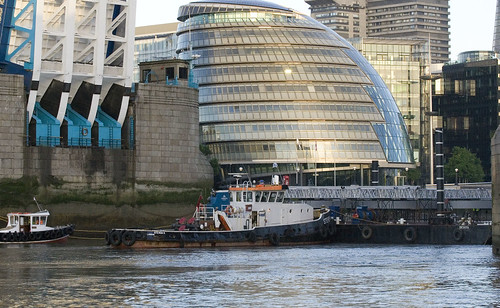 About 6am, the cables started descending, with eye hooks on the end. Despite the wind, the cables swayed only slightly. I presume the length of the cable giving it enough weight to resist the wind.

Down they flowed to meet the barge below, and after a short hiatus, hit the bottom with a chorus of rattles as the cables banged against the scaffold structure in the wind. 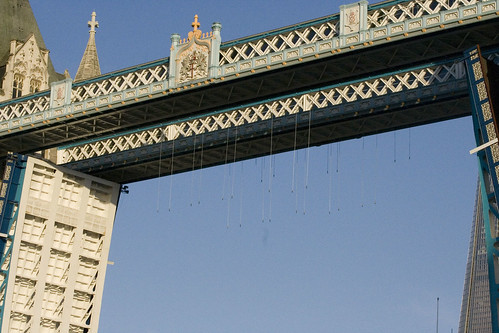 A bit of activity as people wearing rigging harnesses — and shorts! — clambered all over the scaffold, but curiously didn’t seem to be connecting the cables, which after an hour or so then rose back upwards again a bit.

After another half hour of hanging around in the cold, I wandered off to see when the local coffee shop might open, and as it is in a tourist hotspot, I was delighted to see it was already open. Phew!

Trotting back to the vantage point, also just in time as the riggers had reappeared and now in a flurry of action were connecting the re-descended cables onto the scaffold structure. 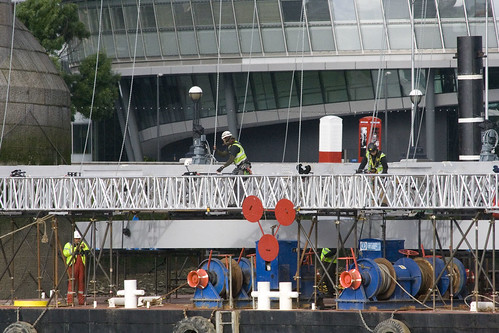 The cables tightened and with barely a murmur, the whole structure rose upwards.

I wasn’t the only person watching – there was a film crew on the barge itself, and the hi-vis sorts on the bridge were taking photos. I had thought it would be great if someone stayed on the structure as it rose, but that would never happen, would it? Yes, it would – several people rode the scaffold as it ascended upwards.

Not a smooth elegant rise though – as it stopped at regular intervals as it ascended, which I guess was so that the cable winding kit above could tie off the cables in case the winding kit broke. Or maybe it was something else? 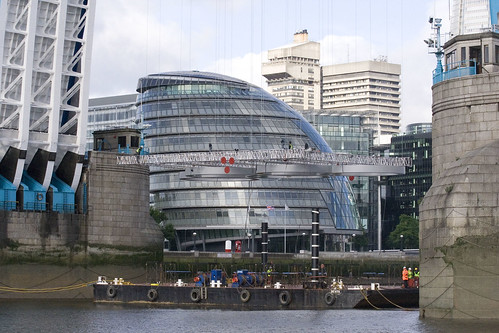 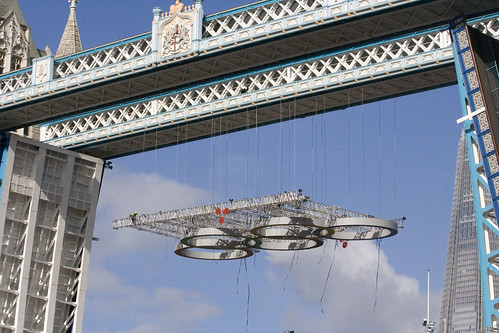 The barges also started moving out of the way.

Slowly though, the scaffold rose, and after a while, it was possible to make out the Olympic Rings clinging on underneath. And eventually, it reached the very top of the Bridge, and the passengers who rose up with the scaffold could now be seen climbing around and doing whatever it was that they had to do to secure the scaffold to the walkway. 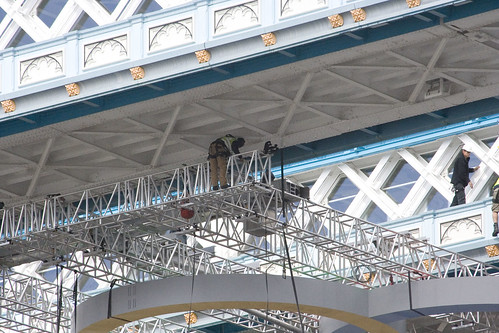 The Bridge remained open even though they were out of the way of the bascules – I guess that if something unfortunate happened, then falling into the river will do less damage than falling on the road.

This marked the end of the event as far as I was concerned.

The scaffold holds the rings in place, and my understanding is that next Wednesday the rings will be swung down to hang vertically under the bridge in what is bound to be a bit of a media fuss.

You may be aware of the ancient rules about straw bales?

If not, then the Port of London Authority has a by-law that requires if a bridge arch is open to river traffic, but the height is restricted, then you have to hang a bale of straw from it to warn boats. Even Tower Bridge, despite its great height still needs a bale of straw, and indeed last year had one when they were repainting the top.

Sadly though, the Olympic Rings, although quite an obstruction when vertical, can fold away again if a large ship is coming through, and the flattened structure is not enough to trigger the by-law, so no need for a straw bale.

Which I think is a huge pity as I was really looking forward to a photo of the modern shiny Olympic Rings, with a couple of rough bales of straw on either side of it. Oh well. 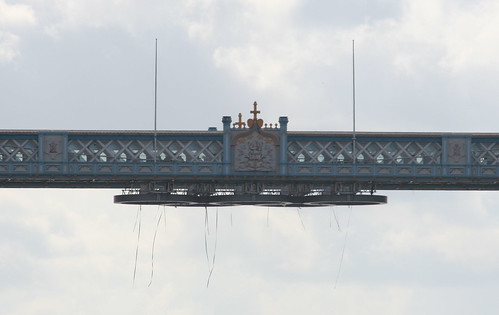 You can see the full set of photos here.

You can get a closer look at the scaffold from above this Friday, as the top walkway will be open to the public free of charge between 6:30-9pm as part of the Celebrate the City events.