The moment that I was allowed to open Tower Bridge

Yesterday, thanks to an offer from the City of London, I had a chance to do something really quite special – I was allowed to open Tower Bridge to let a cruise ship pass through.

After the offer to open the bridge was made about a month ago, I was asked to pick a date from the list of openings on the Tower Bridge website and joked that they’d never let me open it for a big cruise ship. Yes, I can they replied, so that’s what I did.

The big dangly things hanging from the bridge at the moment had to be folded away before I arrived, as the cruise ship would have smashed into them otherwise. Even when folded away, there was a clearance of just 1 metre to let the ship pass through.

The control room is a modestly modern affair with a control deck that wouldn’t look out of place in any industrial site. The old levers and switches of Victorian times have been swept away, although the south cabin has them still in place for “behind the scenes” tours. 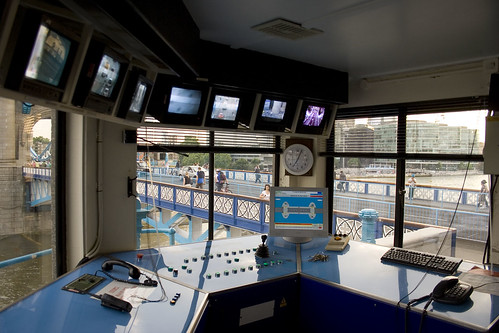 Introduced to the engineer in charge, my job initially was to watch what goes on. This is the sort of kit that has so many safeguards that it would be impossible for me to break it, but with a few thousand tons of cruise ship bearing down on us, it is probably a good idea not to risk it.

As the ship slowly came into view around the corner, that was the cue to start preparing the hydraulic pumps to do their thing, and a warning message on the Tannoy to staff to get clear of things that move.

As the ship approached, it was possible to hear her blasting out Rule Britannia as passengers stood on the bow to get the best view. We knew it was coming bow first as the PLA send a notice to Tower Bridge with details of tugs, tides and which direction the ship is facing. Occasionally they are dragged through backwards, which is less interesting for bystanders to watch. 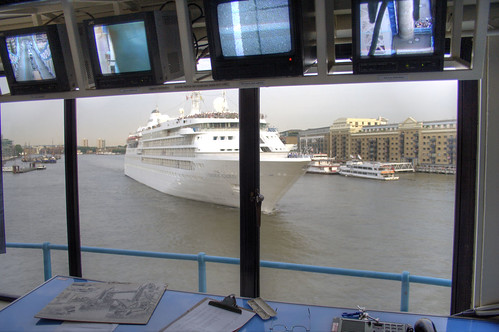 Time to start closing the gates to block road traffic. Lights to red, wait a moment for cars to stop, close the road gates. Staff manually close the pedestrian gates, and the last ones across start accelerating their walking pace as they realise they are the last to leave.

A computer screen shows everything that is happening to the bridge – which seems superfluous considering we could see it out of the window, but there are hidden things to monitor as well.

Four bolts that lock the two halves of the road together in the middle slide back, and large locks at the hinge points move away to leave the two bascules free to move.

Yes, the rings are still out of the way, and all you have to do is pull back on a lever and carry on until the bridge has opened to the correct angle. A look outside as the bridge opened to its full height just to double-check it is missing the rings and when it reached 65 degrees, time to let the lever free. 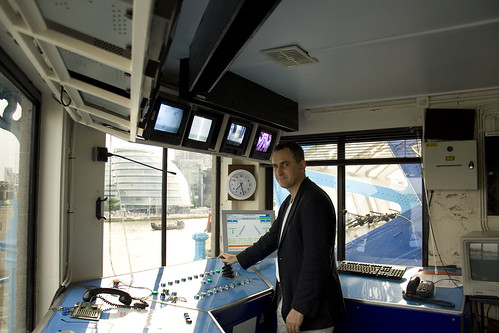 It’s an odd experience in fact.

All a person is doing is pulling a small lever back, but in doing so, activating some amazingly powerful hydraulics that swings these massive sections of the road right up into the sky – and unseen huge counterweights into a chamber below. Also, you know nothing can go wrong, yet there is a very palpable sense of responsibility – especially considering that a problem means the cruise ship would smash into the bridge. 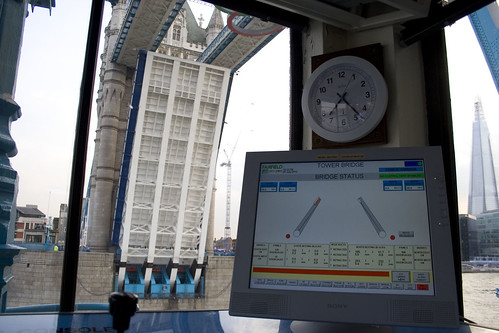 Anyway, bridge open, and gliding through, the Silver Cloud cruise ship. Still blasting out Rule Britannia, which did a good job of drowning out the engine noise – so it was as if the ship literally glided past us – with passengers on board cheering and waving to the crowd – and a member of cabin crew at the back waving a little Union Jack. 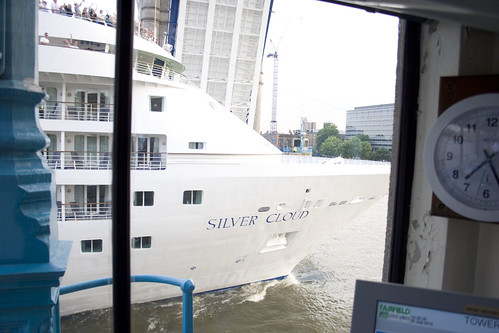 The manoeuvring tug came up behind, and as soon as it was safe to do so, time to close the bridge again – there’s road and foot traffic waiting to use it. Quite simple, just push the lever the opposite way and then silently the huge bascule roadways rotate down to kiss each other at the middle once again.

Press a button to start locking the bolts into place in the middle, then another to lock the hinges again. Now to wait until I am told to press a black button to finish the job.

A warning over the Tannoy to pedestrians to stand back, and their gates opened, followed immediately by the road gates, and as they opened a narrow trickle of cyclists squeezed through the slowly widening gap, then dissipating as the motorists were left waiting for space to pass over themselves.

That’s it – a bridge opened and closed in about 10 minutes.

I have to say that it was one of the more surreal experiences of my life – especially due to the music blasting out as I opened the bridge making it almost movie-like.

It’s probably pretty special for the passengers on board – rather than arriving in London via a lengthy immigration queue at Heathrow, in they come through Tower Bridge to music straight out of the Last Night of the Proms.

Having done the guest lift, I was also given a certificate to commemorate the moment, which was an added surprise. 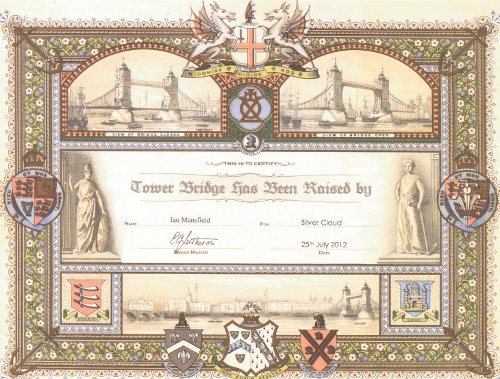 A guest lift is something they do about 3-4 times a month, usually offered as prizes in charity events or to school children, which seems like a nice thing to do.

When I was offered the chance, I was yeah, that’ll be fun, then got a bit excited on the day.

I went home with a gigantic grin on my face.