There is an informal badge of honour that exists amongst bloggers that marks you out as someone who has caught the eye of the mass market media, but are deemed to be too small to be of consequence.

It’s the moment a newspaper nicks a photo or other content from a blog and hopes you wont notice.

It turns out that I have been inducted into this dubious hall of fame, after serial copyright infringers, the Daily Mail decided to write an article, and use my photos to illustrate it.

The blog post in question is the one the other day about the anniversary of the Cock Lane ghost.

To be honest, not one of my best, as there wasn’t anything new I could add to the story other than marking an otherwise probably overlooked anniversary. It is, to historians at least, very well documented, and the Wikipedia page is unusually detailed for something that took place 250 years ago.

I trawled through my own collection of vintage newspapers and engravings to see if I could add much more to the story – but ended up with a summary of the facts. I did however visit Cock Lane to take a photo of it as it is today, and got copies of a couple of contemporary newspaper reports.

You can imagine my surprise then when one of the newspaper scans, and my photo of Cock Lane appeared in the Daily Mail.

Published yesterday by a “Daily Mail Reporter“, then rewritten, rather better to be honest, a few hours later by Nick Enoch – both articles used my photos, without permission, payment or acknowledging my copyright. 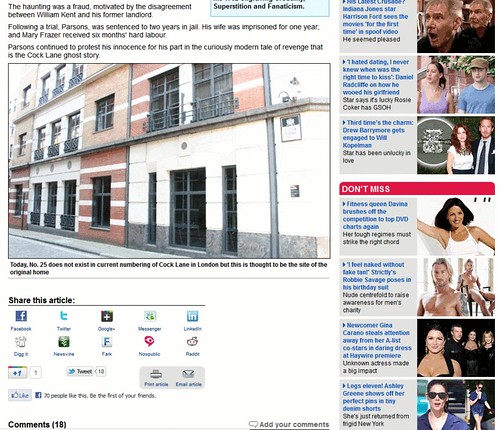 I wont quibble over the text, or that they certainly used my blog post as inspiration (there are some telltale linguistics in the text, especially in the first version), but nicking my photos is rather rude.

It’s not as if they don’t know how to contact me, as the photo editor has been in touch in the past to ask about using my photos, and they have on record how much I charge for that.

I pinged them an email this morning, and am waiting for a response.