It’s the 250th anniversary of the Cock Lane ghost

At some point in a January 250 years ago, in a rented apartment near Holborn, the ghost of a recently dead wife appeared to warn that she had been murdered by her husband.

The Cock Lane ghost was to become a notorious episode that dragged in two competing arms of the Christian faith, scandalised the local populace, excite the national newspapers and even involved Dr Samuel Johnson.

In about 1756–57 William Kent from Norfolk married Elizabeth Lynes, but she died shortly afterwards during childbirth. The child survived though, and Elizabeth’s sister, Fanny moved into the house to help out.

The inevitable happened – but William was barred from marrying the sister of his dead wife – so the two of them moved to London and lived together as a married couple, even though they weren’t legally married.

They fell out with their landlord after he refused to repay a loan to William, who we would today call a loan-shark, so they moved… to Cock Lane in 1760.

At some point at the beginning of January, while William was away and during Fanny’s latest pregnancy, Parson’s daughter stayed in the rented home, and reported hearing scratching sounds and later seeing a ghost.

Sadly, Fanny died at the beginning of February 1761.

Now we jump forward to January 1762. William had sued his previous landlord over the unpaid debt, and was also himself married for the second time (although on his third “wife”).

It was now that knocking sounds began in the former rented rooms, where the landlord’s daughter slept. The knocking apparently emanated from Elizabeth Parsons, who also suffered fits, and the house was regularly disturbed by unexplained noises, likened at the time to the sound of a cat scratching a chair.

It was determined that the knocks were from a ghost, and using a form of yes/no communications, they reported that the ghost was of Fanny, and she accused her husband of murdering her with arsenic poisoning.

On the 5th January, Reverend Thomas Broughton, an early Methodist visited the house and observed the haunting, leaving convinced it was real.

Now the newspapers got wind of the story and started running a commentary about the Cock Lane ghost, which in turn lead to crowds gathering around the house, and being offered tours for a small fee.

On 12 January, Broughton along with two physicians and several witnesses held a séance in the room, where the ghost repeated the allegations against William by means of the knocking sound coming from Elizabeth.

On 20 January another séance was held, this time at the home of a Mr Bruin, on the corner of nearby Hosier Lane. Three days later, and as more newspapers wrote about the story, the Lord Mayor of London became involved and Elizabeth was moved again to another house to try and clear the crowds from the narrow Cock Lane.

A contemporary news account from the Derby Mercury of Jan 22nd 1762 is here.

It was on the 1st Feb 1762 that Dr Samuel Johnson was invited to witness a séance, along with other nobles. 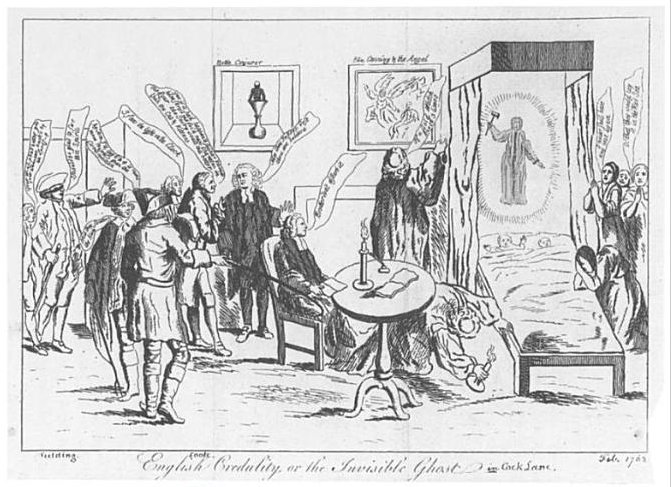 English Credulity or the Invisible Ghost

It was now that the truth came out.

Elizabeth was making the knocking sounds with a small piece of wood she hid in her clothes.

The haunting was a fraud, motivated by the disagreement between William Kent and his former landlord.

Following a trial, Parsons, all the while protesting his innocence, was sentenced to two years imprisonment and three days in the pillory. His wife was imprisoned one year; and a servant conspirator, Mary Frazer six months in Bridewell, with hard labour.

You can read a lot more about the events on this Wikipedia page.

Cock Lane is still in London and is a rather nice pebbled side street, but it proves difficult to locate the exact point where the haunting took place.

The house in question was at 25 Cock Lane, but modern numbering seemed to put this at 20 Cock Lane as it was in 1965. Deeply frustratingly, the usually excellent Horwood Map of 1799 which shows the house numbers, omitted Cock Lane from the listing.

As far as I can determine, this is roughly the site of the haunting – a rather nondescript building today. 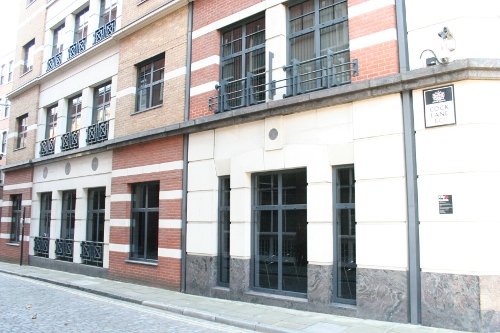 The ghost, obviously, was not in attendance when I visited.