Less Lust, by Less Protein. 50 years ago, a man started walking around with a simple sign exhorting people to avoid protein as it leads to lust. 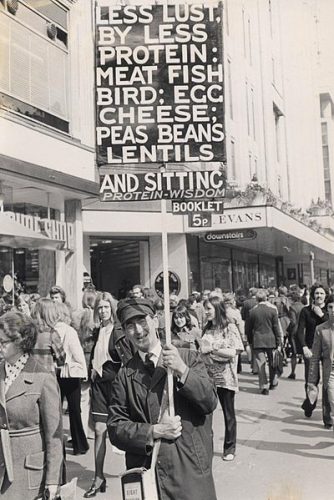 Stanley Green, better known simply as “Protein Man” was a regular fixture on Oxford Street, and although his message was unlikely to appeal to the shoppers, his dogged determination to spread it made him an unlikely subject for affection.

A relic of a bygone age, when standing around handing out leaflets exhorting the children of the promiscuous 60s to repeat their evil ways.

Although famous for his long crusade on Oxford Street, that’s not where he started his campaigning.

Stanley Green was born in Harringay in 1915, and always a deeply puritanical person was shocked by the language used when he joined the Navy in 1938.

“I was astonished when things were said quite openly—what a husband would say to his wife when home on leave,” he told the Sunday Times in 1985. “I’ve always been a moral sort of person.”

When he left the Navy in 1945, he seems to have held down a number of different jobs. The turnover of employment he put down to his upstanding character, as he refused to be dishonest, but it’s as likely down to most workplaces having a banter and attitude that would have ill-fitted his moral views about sex.

He worked as a self-employed gardener until the fateful date in June 1968, when he became… Protein Man, enemy of fish, eggs and cheese!

He was at the time living in a council flat in Northolt, so started his campaign in Harrow on Saturdays, arriving on a bike with his sandwich board. It was six months later that Protein Man decided to travel to Sodom itself, to Oxford Street. He upped the campaign from just Saturdays to every day save of course, the Sabbath.

He cycled each each way, taking about 2 hours on the bike, and brought a packed lunch which he prepared over a bunsen burner at home and ate at a “warm and secret place” near Oxford Street.

His life was given to the cause, walking up and down Oxford Street until 6:30pm every day with his famous black and white sign that called for “less lust from less protein”

His income came from selling a booklet that outlined his manifesto, that he printed at home on a makeshift printing press. 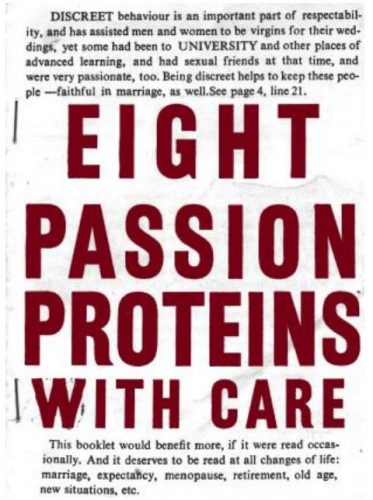 The booklets were technically free of charge, but he accepted donations – of 5p in 1974, but inflation being what it was, the donation was lifted to 7p a few years later, and 12p by the 1980s. The booklet ran to 84 versions, each with an ever-more jumbled text about biological rhythms, sexual abstinence and carnal passions.

When this protein-MANIA has passed, there will be more — happy homes; fewer criminals, delinquent youths, and psychopaths; fewer suicides; and not so many patients in hospitals.

The often rambling text, with a mix of fonts and a dubious sense of grammar are an unlikely best-seller. It’s estimated that nearly 90,000 copies were sold over the years.

The booklet argued that “those who do not have to work hard with their limbs, and those who are inclined to sit about” will “store up their protein for passion”.

Life became a little easier in 1980 when he reached the age of 65 and was given a bus pass. However, the 1980s was also when he was to be arrested, twice, for public obstruction, although how much of that was due to his intransigent approach to lustful behaviour in public, and how much to being an actual nuisance is debatable.

He often appeared in articles and on TV as a symbol of British eccentrics, which in a way was to belittle the person who, however peculiar his aims, was undeniably a diligent hard worker at the campaign.

He was also far less of a nuisance than the bible bashers who stand on street corners shouting at people to repent and hear the word. A quiet oddly gentlemanly manner that stood out as proudly as the placard he carried.

One aspect that was often overlooked is that he didn’t abstain from protein, just called for less of it. He himself ate half an egg per day.

He also spent many evenings engaged in letter writing, to the top figures of the land at the time. He wrote to Edwina Currie about eggs, to Margaret Thatcher about abstinence, to the BBC, to the Archbishop of Canterbury, and often to the newspapers.

He worked on his campaign unstintingly, right up to 1993, when in December 1993, he died at home.

Some of his collection was later acquired by the Museum of London, and his printing press by the Gunnersbury Museum.

What he would make of today’s obsession with consuming protein, for building a good body, for lustful activities later?

Fifty years ago a campaign started, the world has moved on, we still crave lust and protein, but since 1993, Oxford Street has been a slightly less interesting place.