Earlier this week, the bells of St Pauls’ Cathedral were removed and sent back to their makers for repairs. Not that they are under warranty anymore, as they were made by John Taylor & Co in Loughborough… in 1878.

As part of a much needed restoration, they will be cleaned to remove a thick layer of grime and fitted with new moving parts to improve their performance. During the bells’ restoration, the timber bellframe in the Cathedral is also being strengthened to preserve it for many more years.

This will only be the third time in their history that the bells have been silent for any length of time, the previous occasions being the two World Wars and a period from 1925 to 1930 when the Cathedral itself was closed for major building works.

The work has been made possible by donations from the City of London and the seven livery companies who originally gave the bells, bellringing charities, individual ringers including the Cathedral’s own company and other donors. 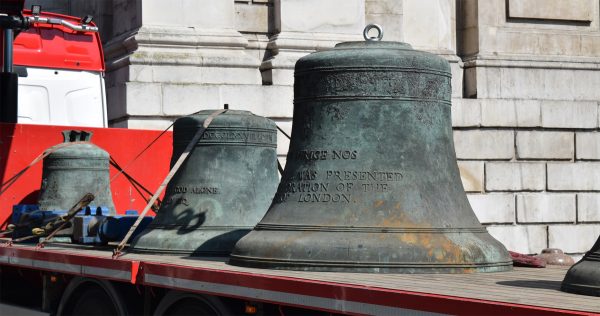 It is hoped that the bells will be back in operation in time for their 140th birthday on 1st November 2018. With routine maintenance, they should then be good for another 140 years.

However, the towers are not entirely silent, as the clock bells, including Great Tom, in the southwest tower continue to sound, as does the original service bell which dates from 1700.

The hours will be marked by Great Tom, which weighs over 5 tons, and as well as striking the hours, is tolled on the death of senior members of the Royal Family, the Archbishop of Canterbury, the Bishop of London, the Dean of St Paul’s or the Lord Mayor of London.

Hopefully, it won’t be needed for an “out of hours” ringing.

The southwest tower also houses Great Paul, the largest bell ever cast in the British Isles, which weighs 16½ tons. Sadly, Great Paul has not sounded for several years because of a broken chiming mechanism. 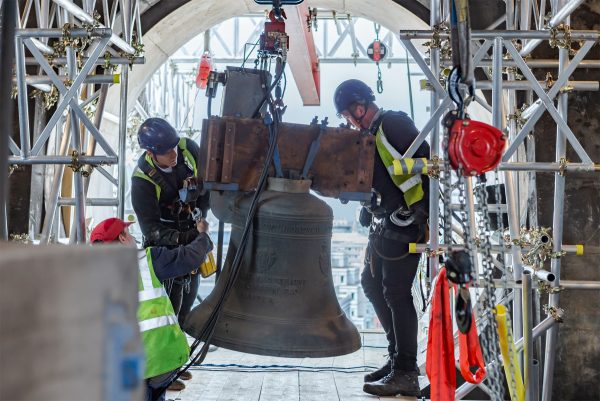