Plans by M&S to demolish its Oxford Street - Marble Arch store and replace it with a smaller store and more offices have been put on hold after the Communities Secretary Michael Gove called the scheme in for review.

Plans to demolish the M&S flagship store on Oxford Street are being looked into by the Mayor of London following a backlash about the plans.

For obvious, and less obvious reasons, right now is a very good time to pay a visit to the Ukrainian Catholic Cathedral in London, which can be found just off Oxford Street in central London.

Westminster Council has granted permission for the 1930s building occupied by M&S next to Selfridges to be demolished and replaced with a modern glass and steel building.

Plans to create temporary plazas on either side of Oxford Circus in time for Christmas have been delayed by Westminster Council.

Just moments from Oxford Street, this is a newish pocket park that sits inside a new mixed development of offices and residential flats with a semi-public square in the middle.

When it opens to the public later this month, the Marble Arch Mound will also feature a one-off light exhibition by W1Curates, called Lightfield, lead by British/American artist, Anthony James.

More information has been released about plans to pedestrianise the lengths of Oxford Street next to Oxford Circus and divert road traffic around it.

The former Debenhams store on Oxford Street is likely to lose its distinctive metal facade if plans for a refurbishment are approved.

A ‘Photography Quarter’ is being created just off Oxford Street, and near to the Photography Gallery.

Oxford Street shop to be covered in light based art display

A light display is set to cover a large Oxford Street shop later this month as shoppers are allowed back into town once more.

Another large Oxford Street retailer is looking to downsize in light of the recent surge in online shopping, and this time it's M&S.

A temporary hill as a viewing platform planned for Marble Arch

A large mound of soil is to be piled up next to Marble Arch to create an artificial hill and viewing platform for the area, looking out over Hyde Park.

This is a narrow alley right next to Oxford Circus that is soon to vanish, replaced by a new property development.

What was the Top Shop shop before Top Shop was in the shop?

The news is abuzz with news that the huge branch of Top Shop at Oxford Circus is up for sale, but what was there before it was Top Shop?

The old lion of Oxford Street

Opposite Bond Street tube station can be found a small brick building, with a lion on top.

The shopping heart of London will soon have fewer shops, after the local trade group announced plans for a large-scale revamp of the area.

Less Lust, by Less Protein. 50 years ago, a man started walking around with a simple sign exhorting people to avoid protein as it leads to lust. 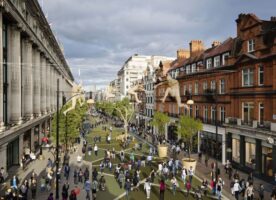 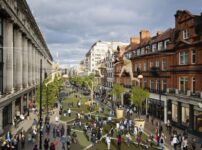 A consultation that could see Oxford Street pedestrianised closes next week. 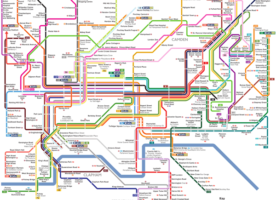 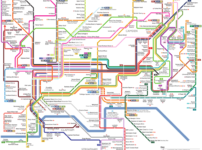 The arrival of the Elizabeth Line (nee, Crossrail) in a couple of years time will see more changes to central London -- as buses services are to be cut.