A Tunnel Deep Under Trafalgar Square

Posted on 8 April 2010 by Posted in History, Underground London

Did you know there is a tunnel running deep under Trafalgar Square? Nope, neither did I as it happens!

I had been told that the fountains in Trafalgar Sq were fed by ground water, but like many of the things we are told as kids, we might not think as adults to check if they are correct until maybe prompted by a pub quiz or the like.

I was not prompted by a pub quiz this time, but by trawling through my recent deliveries of the Illustrated London News, of 1845 – and yes, indeed the fountains are, or more correctly – WERE, powered by water taken direct from the ground.

The whole system was replaced in the 1930s with mains supply water as the artesian wells never really lived up the hype when first switched on. The two original red granite fountains were replaced with the pale grey stone basins at the same time – and the originals are now in Canada.

Anyhow, back to the tunnels – two deep shafts were drilled down to the water table – one in Trafalgar Square itself, and one behind the National Gallery – and then linked up deep underground by a fairly sizeable 6 feet wide tunnel. Although a “mere” water tank, the length and size of the structure is quite impressive.

Considering that this deep-level tunnel “tube tunnel” was constructed some 40 years before the first tube train tunnel, this is a quite incredible feat of engineering.

Below is a transcript of the news item from the Illustrated London News, as usual click on the images for larger versions.

On Tuesday morning last at seven o’clock, Mr. Barry, the architect, attended by the engineers of the above works, and other scientific gentlemen, with a few members of the Government, met in Trafalgar-square, to witness the playing of the fountains, at various heights, and to inspect the engines connected therewith. The experiments were perfectly satisfactory; and it was then decided that the jets should commence playing at noon on Saturday (this day). The present is, therefore, the best opportunity for introducing to our readers the details of this truly scientific embellishment of our metropolis, which has so long exercised the curiosity of the public, as well as the good humour of those accustomed to cater for their gratification, literary and otherwise.

The disposition of the beautiful area of Trafalgar-square, unquestionably one of the finest sites in the metropolis, will be best understood by the large engraving below; and we proceed to the details requisite to the entire appreciation of the fidelity and minuteness of the accompanying illustrations, merely premising that a twofold object has been attained in this improvement – the embellishment of the Square and the more useful object of a better supply of water to certain of the Government establishments. 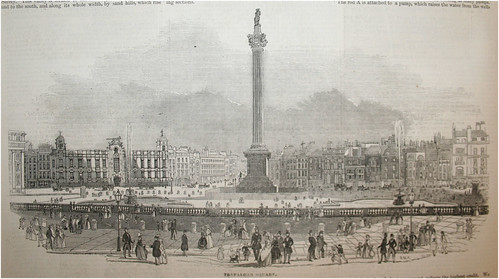 The wells for supplying the water to the Fountains and Government offices, are sunk on the principle of those generally termed Artesian. These are perpendicular borings into the earth, through the impervious to the porous strata, though which the water has percolated, and accumulated in large quantities. The shaft being made, the imprisoned water, in its endeavor to find its own level, rises through the strata to the surface of the soil, producing a continuous flow or stream of pure water. This effect would have been produced in these we are describing, and in all others similarly formed, were it not from the number of other wells which have been sunk for the various breweries, manufactories, and general consumption of London, having so greatly reduced the quantity, that the remaining water is not capable, through its slowness of percolation, of rising higher than to about a hundred feet below the surface, thus rendering it necessary to use force to raise it to the required height. 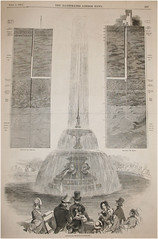 The water for the Artesian Wells of the metropolis is derived from the rains which fall in the central valley of Holmsdale – a district of about ten miles extent, running to the east and west of Reigate, in Surrey. This valley is formed to the north by the great chalk range, and to the south, and along its whole width, by sand hills, which rise form beneath the chalk strata. These sands absorb the rain-water, but are prevented from parting with it by the stiff clays of the weald upon which they rest. The water thus obtained runs beneath the bed of the chalk, is partially absorbed by its lower surface, and forms, on reaching the site of London, a grand reservoir, at a depth of upwards of 250 feet beneath the valley of the Thames.

At the back of Trafalgar-square there are two wells, one in Orange-street, and the other in front of the National Gallery. The bores of these wells, to the depth of 175 feet, are, the former 6 feet, and the latter, 4 feet 6 inches in diameter these are connected together at the depth of 170 feet, by a tunnel, 880 feet long and 6 feet in diameter, and capable of containing about 70,000 gallons of water. Below this bore, at the Orange-street well, is a smaller one, to the depth of about 300 feet, whilst that in front of the National gallery is 395 feet deep. The strata through which the operation of boring has passed will be seen in the accompanying sections.

The machinery for working the wells, for throwing the jet, and for the supply of the various offices, consists of two engines – a large Cornish one, and a smaller inverted direct-action engine. The larger one is for all the general purposes of supply, as well for the fountains as consumption, and has attached to its beam three rods, working as many pumps. The rod A is attached to a pump, which raises the water from the wells for the supply of the public offices, &c. The connecting rod B is attached to a pump capable of lifting from 500 to 800 gallons of water per minute, into a large tank or reservoir for playing the fountains.

The smaller engine, C, is built on the direct-action principle, working with the cylinder inverted and leaving the piston rod immediately attacked to the pump rods. It is extremely simple in its construction, but remarkably effective in its action. Its operations are confirmed to the changing of the water for the fountains, but its principle use is, as a reserve engine, for supplying the public buildings with the necessary quantity of water, in the event of the larger one being out of repair. The two engines are worked by two boilers, fitter with Jucke’s patent smoke-consuming furnaces, by which means such works are enabled to be carried on in the centre of the metropolis without subjecting the inhabitants to the annoyance of smoke. 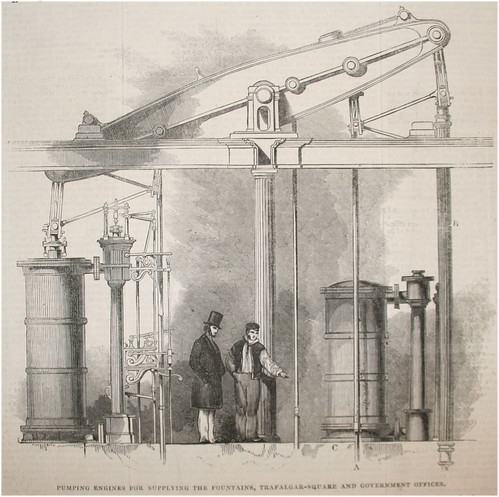 The wells and tunnel, when at rest will hold about 122,000 gallons of water; and some idea may be formed of the supply of the liquid from the fact that 300 gallons per minute raised for thirty hours in succession, lowered the water in the wells only 50 feet; thus leaving an amount of water stil in reserve of upwards of 91,000 gallons. The water is of an excellent quality, soft and pure; the Reform Club and Club Chambers have been supplied by the same source, and its goodness and purity have been highly commended.

The fountains are from the designs of Mr. Barry, and are executed of Aberdeen or Peterhead granite, by Messrs. Macdonald and Leslie, of Aberdeen. The granite is peculiar for the redness of its colour, as well as from it hardness and durability, and is capable of receiving a very high polish. These qualities are owing to the almost total absence of mica in the composition of the granite – quartz and feltspar being its chief constituents, and the latter, in proportions which rival the rich flesh-coloured granites of Egypt.

The design is simple, but chaste and elegant. A massive curved octagonal base, upon which are four dolphins’ heads and fins, supports a magnificent flat vase, from the centre of which rises a pedestal supporting a smaller, but similar vase, and in its center is places the granite mouth for the jet. From this mouth the water is thrown up in a close stream to the desired height, when it spreads out and descends into the upper vase, from thence to the lower one, and so falls into the basin; at the same time, a flat stream issues from the mouths of each of the dolphins. The quantity thrown up by the two fountains will be 500 gallons per minute; but, when requisite, 800 or 1000 gallons can be thrown up with equal ease, in the same space of time.

The basins as the bottom add greatly to the beauty of the fountains; and it has been arranged that they shall at all times be kept brim full of transparent water.

The effect of the entire square is magnificent; but it is not such an one as woos the pedestrian to repose, or the idler to lounge. In summer, “the sun smites by day, and the cold by night;” and in winter, the biting winds make it equally intolerable. On the Continent, were a Place Grand is constantly a Place Vert, these fearful inconveniences would have been remedied by groves of trees; and we may add, that not only would the public have been benefited, but the effect of the architecture itself would have been assisted by such an arrangement in the vast promenade of Trafalgar-square.

The contract for “spouting water” is ten hours a day om the average – that is, in the summer the fountains are to play thirteen hours per day, and in the winter seven hours. The height to which the water is to be thrown will vary, according to the weather, from 25 feet to 40 feet from the ground.

The mode of procuring the water, its quantity, distribution, &c., as well as the engines and all the other apparatus connected with this undertaking, are the work of Messrs. Easton and Amos, of the Grove, Southwark, on whom the whole management reflects the highest credit. We understand that the entire cost of sinking the wells, &c., the engines, pipes, and all attendant machinery and expenses, is somewhat under Â£10,000, exclusive of the granite fountains; and for this, the permanent means of supplying the whole of the Government offices from Charing-cross to the new Houses of Parliament, inclusive, is insured, as well as the necessary consumption for the watering of the streets, &c.

The saving which Government will effect by this mode forms no inconsiderable item in its advantages, for the present contract for furnishing the requisite quantity of water being Â£500 per annum, and the sum hitherto paid to the water companies double that amount.

1 Pings/Trackbacks for "A Tunnel Deep Under Trafalgar Square"