About the Trafalgar Square

Trafalgar Square is a large open plaza in central London which is often used for public events, and has a number of statues and the famous Nelson's Column.

At the bottom of Nelson's column are four bronze cast lions that appear to be on guard.

One of the four plinths in the square is used for a regularly changing work of contemporary art, to contrast with the military statues on the other three.

On the north side of the square, under the steps, there is a cafe and toilet.

The square used to be famous for its pigeons, but feeding them was banned and now the population has largely gone away.


IMPORTANT - Although venues are reopening, their hours may differ from normal, and most now need prebooking before you visit.

The next commission of public art for Trafalgar Square’s fourth plinth will be unveiled soon, so there are just a few days left to see the current occupant, a giant ice cream.

Trafalgar Square to screen the EURO 2022 final on Sunday

Football fans will be able to watch the EURO 2022 final between England and Germany in Trafalgar Square this coming Sunday.

West End shows to perform for free in Trafalgar Square

A host of West End shows will put up free performances in Trafalgar Square later next month as part of the West End Live event to show off Theatreland’s offerings.

A celebration of the theatre stage and musicals will fill Trafalgar Square next month, as a free event.

Six blockbuster movies filmed or set in London will be shown on a big screen in Trafalgar Square later this month – for free.

A dollop of ice cream is art in Trafalgar Square

Unveiled recently, Trafalgar Square has gained a giant dollop of ice cream with a cherry on top as the latest modern art installation for the 4th plinth.

In 1766, a plan was published for the improvements of London and Westminster that could have resulted in Trafalgar Square as we know it today looking rather more like Leicester Square.

This is the alley near Trafalgar Square that isn’t the narrowest in London, although it is often claimed to be. It’s also less famous for Queens, of both sorts.

The two roads that run from Leicester Square towards Trafalgar Square are to get a major revamp with wider pavements and fewer cars.

The Canadian High Commission occupies a newly-renovated grand building overlooking Trafalgar Square, and is not generally open to the public to wander in.

Red Arrows to fly over London for Pride

Look to the skies this Saturday (6th July) at the Red Arrows will fly over central London.

If you fancy an architectural model of Trafalgar Square, made from LEGO, then you’ll be able to have one in just a few weeks time. 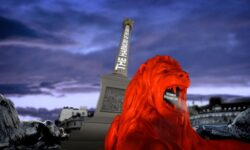 Trafalgar Square to get a fifth lion next month

A red lion will be added to Trafalgar Square next month, as part of the London Design Festival.

Trafalgar Square – the history, the hidden tunnels, the statues, the lions, the column, the so-called police station, the imperial measures, and even some woolly mammoths.

You might have seen a small round cubicle on the edge of Trafalgar Square and been told it’s the London’s smallest police station. You might have been told that it was an idea of Sir Lionel Edwards. Both are wrong. 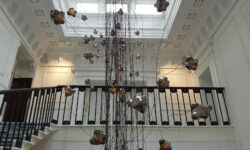 For two hundred years, you’ve been a grand stately building in a prime part of London, but just recently, holes have been knocked in your backside, and lots of modern art scattered around your grand rooms. 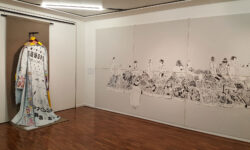 Apart from the political transformation, revolutions often throw up blasts of cultural output as repressed people explode in a frenzy of creativity. 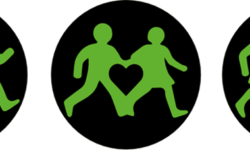 Around 50 pedestrian traffic signals around Trafalgar Square have had their ‘walk’ image replaced with new diversity images as part of the celebrations for Gay Pride this coming weekend. 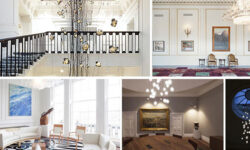 The Canadian High Commission occupies a newly-renovated grand building overlooking Trafalgar Square, and is not generally open to the public to wander in.

Today where a classical Victorian hotel stands overlooking Trafalgar Square, there should be a massive white curved pyramid — the Blob.

Trafalgar Square’s a big empty space isn’t it? Surrounded by roads full of cars looking for somewhere to park. What a waste of space it is. Let’s turn it into a car park! 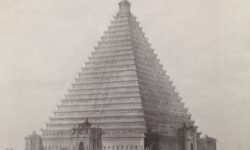 200 years ago, a plan was announced to plonk a giant pyramid in the centre of London, for no purpose other than to cock a snoot at the French. 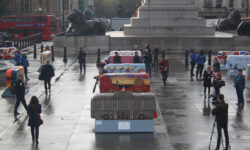 60 mini Boris Buses to be deployed across London

A display of some of the 60 new mini Boris Buses took place in central London this morning causing more than a few heads to turn and people to point and giggle at the sight.

This will make some of us feel old — it has been 30 years since Prince Charles stepped into the controversial limelight and made his famous Carbuncle speech.