How the railway telegraph helped arrest a murderer in 1845

Not long after the New Year festivals of 1845 had died down, the news media of the time was much occupied with the tale of a murder in Slough.

The story was notable for quite a few reasons, thanks to the nature of the murder – being by poison – and that the murderer was a wealthy gentleman who was in fact a former forger who had been sentenced to transportation to Australia for 21 years, but released early for good conduct.

However, equally exciting to the readers was the novel use of the newly invented Electric Telegraph which allowed news of the murder to be communicated from Slough to Paddington while the murderer was still on the train. Thinking his escape (in disguise) was secure, he was doubtless shocked to be arrested shortly after arriving in London.

There is considerable news coverage of the events as they unfurled during the murder trial, but one article in the Illustrated London News of Januay 1845 was devoted to explaining how this electronic marvel worked.

I have transcribed it below, and you can click on each image for larger version.

THE MURDER AT SALT-HILL – THE ELECTRO-MAGNETIC TELEGRAPH, AT SLOUGH 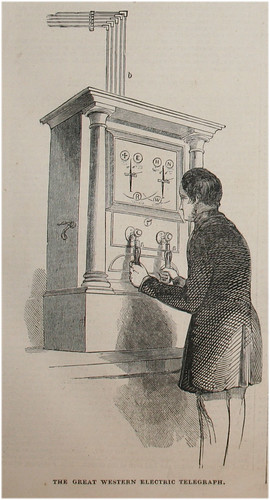 An extraordinary instance of the working of the newly-applied power of electro-magnetisim will be found in the details of the “Murder at Salt-Hill,” in another portion of our journal. The eventful circumstance is of such interest as to induce us to submit to our readers a series of illustrations of the detailed means by which the intelligence of a suspected person being in a railway train, has been conveyed from Slough to the metropolis, after the train itself had started from the former place. The instrument of this important result is the Electro-Magnetic Telegraph on the Great Western Railway between Paddington and Slough, a distance of eighteen miles; by which any communication can be made from one point to the other in an almost inappreciably short space of time. To Professor Wheatsone and Mr. Cooke are we indebted for this valuable application of electro-magnetism; they having mad an entirely new arrangement of their telegraph, by which it has been greatly simplified, and possesses considerable advantage over the former one.

We have already adverted to the performances of this Telegraph, and have engraved the exterior of the station at Slough, in which the apparatus is worked. We shall no present to our readers the details of such apparatus; before which, however we shall relate from the evidence on the Coroner’s Inquest at Salt Hill, the steps which led to the successful employment of this novel means of communication.

The Rev. E.T. Champnes, vicar of Upton-cum-Chalvey, examined. Hearing of the suspicious dead of the deceased, and that a person in the dress of a Quaker was the last man who had been seen to leave the house, I proceeded to the Slough station, thinking it likely he might proceed to town by the railway. I saw him pass through the office, when I communicated my suspicions to Mr. Howell, the superintendent at the station. He left for London in a first-class carriage. Mr. Howell then sent off a full description of his person, by means of the electric telegraph, to cause him to be watched by the police upon his arrival at Paddington.

Mr. Howell, of the Slough station, deposed as follows:- The prisoner left for town last night by the 7.42 train. I dispatched orders by the telegraph to have the prisoner watched on his arrival at Paddington. A few minutes afterwards an answer was returned, stating that the suspected party had arrived, and that Sergeant Williams had left the terminus in the same omnibus for the City.

The words of the communication were precisely as follows:-

A murder has jus been committed at Salt Hill, and the suspected murderer was seen to take a first-class ticket for London by the train which left Slough at 7h. 42m p.m. He is in the garb of a Quaker, with a brown great coat on, which reaches nearly down to his feet; he is in the last compartment of the second first-class carriage.

The up-train has arrived; and a person answering, in every respect, the description given by telegraph came out of the compartment mentioned. I pointed the man out to Sergeant Williams. The man got into a New-road omnibus, and Sergeant Williams into the same.

The telegraph apparatus consists of two wires suspended the length of the line, and attached at either end to the instrument, as seen in Fig. 1, and a branch wire from the instrument, attached to a large metallic surface, imbedded in the earth, for completing the electric circuit. The wire at Paddington is connected with the gas pipe, and that at Slough with the pump-engine. When the instrument is not in motion, the handles, a a, are down, as seen in Fig. 1, and the pointers remain in their vertical position. The handles are connected by an arrangement of pins and springs, with the battery and other wires.

The signals are given by two magnetic needles (see Fig. 2), or pointers, h, each suspended vertically on an axis passing through the dial. Behind the dial another pointer is fixed on each corresponding axis. A portion of the conducting-wire, many yards in length, is coiled (i, k) round the galvonometer frame, in which the magnet moves, so as to subject the magnet to the multiplied deflecting force of electric current. The motion of the pointers is limited by a fixed stop, or pin, at either side. 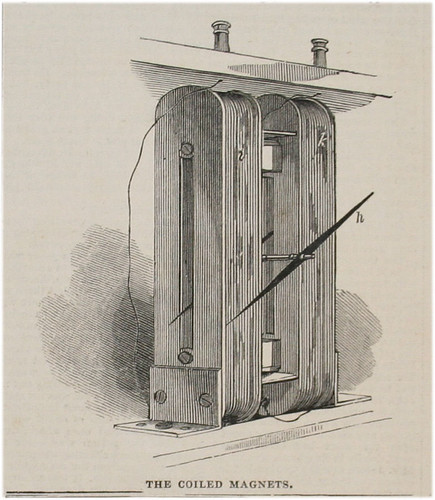 When a signal or communication is to be made, the operator, by turning the handle tot he right or left, breaks the electric circuit, and presses the wire against the pins connected with the battery poles; the coils of wire, i k, then receiving their full deflective force, attract the magnetic needles, h, to either side, according to the course of the current; thus if the stream of electricity first passes into the coil k, the upper point of the needle will be attracted to it, viz. to the right; if the stream first passes into the coil i, then the needle will be attracted to the left, thus giving the whole motion necessary to the pointers. The movement of the handles and the consequent deflection of the pointers at either end of the line are simultaneous, no noticeable period of time elapsing between the giving of the signal at one end, and its reception at the other. 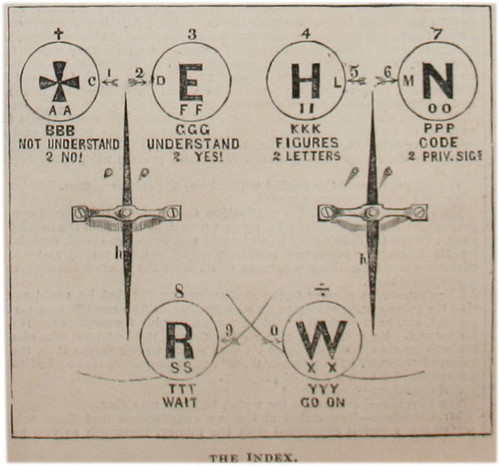 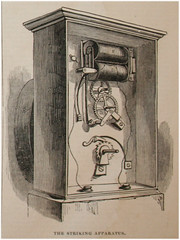 Previous to giving a signal, the operator calls the attention of the attendant, as the distant station, by the ringing of a bell, which is accomplished by a very ingenious and simple apparatus (see Fig. 4); c c are two coils of wire, the ends of which, passing through the bottom of the frame, are attached to the general wires of communication; d is a piece of soft iron attached to the lever e, and held firmly against the pin f, and, consequently, by giving motion to the wheels, sets at liberty the striking hammer, which acting upon the alarum bell g, gives the loud, clear ringing to necessary to attract instant notice.

The alarum is generally affixed to the top of the general signal apparatus (Fig. 1); but for the better explanation of its contrivance, we have removed the outer ornamental case.

It is well observes in the Times’ report of the inquest, that “had it not been for the efficient aid of the electric telegraph, both at Slough and Paddington, the greatest difficulty, as well as delay, would have occurred in the apprehension of the party now in custody.”