When the Millennium (aka, Wobbly) Bridge was opened by the Tate Modern, it was heralded as marvel partly for its construction, but also for being devoted solely to pedestrians.

This was not the first pedestrian only bridge over the Thames though, as in 1845, an earlier suspension bridge had been opened over the Thames, linking what it today the South Bank with the then Hungerford Market on the North Side.

The foundations for the bridge were later taken over and used a support for a railway bridge that would link up with the new Charing Cross station that was built on the site of the former market. Pedestrians were relegated to a narrow strip of a pathway on the side of the bridge until the modern pedestrian bridges were added in 2002.

Although that original suspension bridge was only around for 15 years before being demolished, its heritage still lives on – as the original brick piers are still there – still supporting the railway – and the suspension chains were re-used in Bristol’s Clifton Suspension Bridge.

Below is a picture noting the opening of the bridge, and an accompanying article from the Illustrated London News. 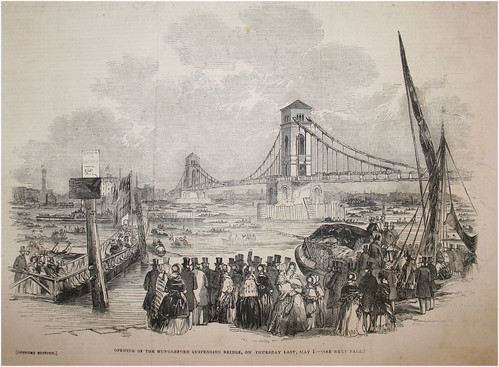 OPENING OF THE HUNGERFORD SUSPENSION BRIDGE

At length, this new bridge across the Thames from Hungerford Market to Lambeth, has been so far completed as to be opened to the public on Thursday, at noon. There was no ceremonial, but the gates were merely opened to foot passengers, on the payment of a toll of one halfpenny at either end. The bridge was inspected by his Royal Highness Price Albert, a few days since: it is certainly, a remarkable work of construction and mechanical skill; and, though its details have often been submitted to the public we are justified in quoting the following as the most accurate, as well as recent: they were submitted by Mr. Cowper to the Royal Institution, on the 18th ult:-

The bridge is for foot passengers only: It consists of four broad chains, viz. two chains, one above the other, on each side of the platform; each chain consists of ten and eleven links alternately, and, near the piers, of eleven and twelve. This increased strength is to meet the increased strain which takes place near the piers. The chain of the Menai Bridge is only five links wide, and the chain of the Hammersmith only six links wide; but the great breadth of the Hungerford chain (viz. eleven links, or about two feet) give them greater power to resist the effects of the wind, and thus to prevent vibration. Two brick piers, in the Italian style, are built in the river, over which the chains are carried, forming thus a central and two side spans.

The chains are attached to large wrought iron vertical plates at the summits of the piers; these plates are firmly bolted together, and also to a strong horizontal plate, – the whole forming what is called a saddle. The saddle is not fixed to the pier, but rests on fifty friction rollers, these resting on a thick iron plate, which is supported by a solid mass of iron and timber girders. The pier itself, being pierced with arches, may be considered to consist of four columns of brickwork; the girders, therefore, are so arranged, that no weight is thrown on the arches, the whole weight resting on the columns. The saddle is capable of moving eighteen inches each way, equal to three feet entire motion; so that if either span were crowded the chains would adjust themselves, and the strain be still perpendicular upon the piers, and have no tendency to pull the pier over.

The method of putting up the chains was thus:- Two sets of wire ropes, each consisting of three ropes, were hung from abutment to abutment over the piers, in the exact situation the chains were to occupy, – these scaffold ropes, as they may be called, being distant from each other equal to the length of the connecting pin. A few feet above the scaffold ropes, two other ropes were hung in like manner; on these traverses two light boxes, very much resembling a carpenter’s bench turned topsy turvey. These cradles as they are called, were connected together, and contained two windlasses, like those over a common well; these cradles held the workmen. A barge containing the links is moored under the cradles: four men in the cradles hauled up a link; and when they had raised it above the scaffold ropes, the connecting pin was put through, and the pin being allowed to rest on the scaffolding ropes, of course supported the link. The cradles were then moved forward, and two links joined to the single link, then one joined to the two; the chain consisting, thus, in the first instance, of alternately two and one links. When this two-and-one link chain was completed, the scaffold ropes were not required, the two-and-one chain link forming, as it were, as scaffold for the rest of the links; and thus was this bridge erected without any scaffolding but these few ropes, and without the slightest impediment to the navigation, and without a single accident.

2 Pings/Trackbacks for "The Original Hungerford Bridge"