Posted on 5 August 2009 by Posted in Events and Tours, Museums, Underground London

Today was the highly anticipated 1938 tube train run along the modern Jubilee Line extension, and a rare chance to visit the disused platforms at Charing Cross station. Although I have been on the train several times – the last one booking an entire carriage for a private group, this was still a chance not to be missed.

As the excited crowd gathered at Stratford station, the tannoy repeatedly asked passengers for the 1938 heritage train to assemble by platform 13. Unlucky for those on the platform waiting for a normal train who were politely evicted – but lucky for the rest of us!

Shortly before the train arrived, we were let onto the platforms and I noticed a nice touch in that the display indicator mentioned the train trip. Previous trips on the Northern Line have usually just said “train not in service”. Small things like this make me a happy person. 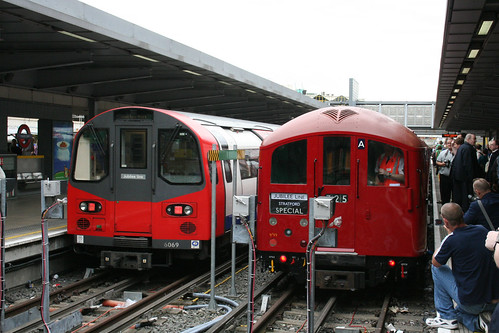 As the train pulled in, the usual rush to get photos of it arriving, and I also managed to snap a shot of the old train and a modern one sitting next to each other before the modern train took off with conventional passengers.

A few people I recognised were there, so we traveled together for much of the journey – The Charlton dwelling author of the 853 blog and fellow tube geek, London Stuff (who snuck into the drivers cabin for a while)

After a short wait we were off!

As before, the trip was basically a run along the train lines without stopping – so in itself it shouldn’tÂ  be that exciting. Somehow though, the nostalgia, and the sheer unusualness of the trip makes it worthwhile – and as before, watching the dumbfounded looks of people on the platforms as this bizarre old train passes through the station is a sheer delight.

After leg-stretching at West Hampstead as the train was stopped and turned around, we re-embarked and headed back down the line towards Green Park. Here the excitement got palpable, as the train deviated from the usual line and hurtled down the old tracks to the disused platforms at Charing Cross. Even though that was my normal station for many years, it was really nice to see the old platforms again. 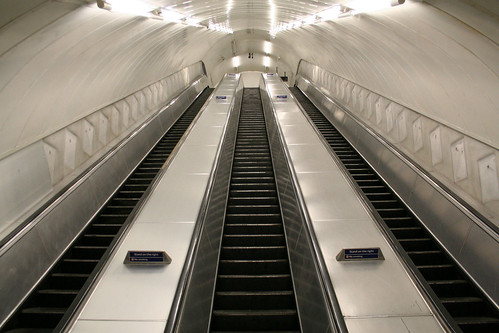 We were given a very healthy 20 minutes to take photos of the old platforms and wander around a bit, while various people posed in the drivers cabin for photos. Then back on the train and off up to West Hampstead again where our trip ended. A second trip later in the day took people back along the line to Stratford.

Even though I have been on the train a few times, two new things struck me today. One was that the old lights never ever flickered throughout the journey. Considering how often modern strip lights flicker or go out on trains, this was an interesting oddity. The other, is that I was able to see a lot more of the tunnel infrastructure as we went along. I suspect a fair bit was lit up, but the lack of double glazing on the old trains does seem to make it a lot easier to peer out in to the tunnel gloom.

The tickets to this trip, even though it was mid-week rather than at the weekend, sold out so fast that I really wouldn’t be surprised if they try to squeeze another run in before the signaling upgrade makes it impossible to run the old train along the tracks.

As an end-point, as I got off at West Hampstead, I was approached by the press officer who had overheard my chatter on the train and asked if LBC Radio could ask me a few questions. It is actually quite difficult to put into words why I enjoy taking these heritage trips, especially when a microphone is pointed at you, so I fluffed my lines a bit. Maybe the train racing past in the background means they might not use the interview. Erk!

I get emails from a person within TfL letting me know of upcoming heritage trips, so I usually post a note on the blog when I get told about them.