Published 19 September 2010 by By Ian Mansfield Events and Tours, History

The exterior may look suitably anonymous to the average passer-by, but inside number 74 St James lurks not only an impressive interior, but also hosts an important aspect of the history of the modern Tory Party.

The building was the headquarters for the Conservative Club which was formed in 1840 as a rebellion against the more formal Carlton Club which is still to this day the “official” gentleman’s club for the Tories. 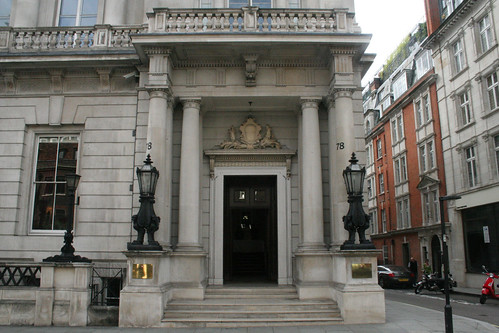 Although the dissidents first met in 1840, they didn’t move into St James until the completion of the current building in 1845. After a bomb was dropped on the non-political Bath Club in 1941, the two shared the same building until a merger in 1950.

They moved out of the building in 1959, and it stood empty until 1971 when McKinsey needed a larger office in London. They are the people largely responsible for the reasonably sensitive restoration – although the building is now occupied by the private banking arm of HSBC.

The merged club itself was disbanded in 1981.

The land the Club now stands on was made up of various properties, most notably a tavern and yard, along with shops and accommodation. Although negotiations started in August 1840, it took until early 1842 to tidy up all the various leases and buy the land as a whole block.

The contractors for the new building were Messrs. Baker and Son, whose tender was for £28,670.

The exterior of the building is fairly classical, but was originally clad in cheaper stone than the usual Portland Stone more common for grand buildings. The cost saving measure was a poor decision though, for in 1866 £3,500 was spent on repairs to the masonry, apparently carried out in Portland stone.

The interior though – that is what stuns visitors. 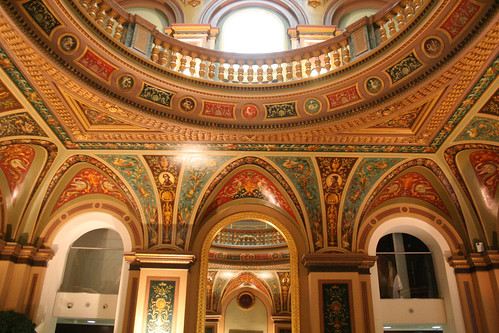 The interior is done in the highest of Victorian styles with all the classic elements you would expect, including medallions of the most suitable writers and artists as determined by Victorian sensibilities.

The design was generally well received by contemporary accounts, although some publications took exception to the choice of artists – Messrs. Frederick Sang and Naundorff – as they were foreign!

Visits to the building were by pre-booking with the Open House London event, but there are no organised tours, and you are left to wander around much as any other building open over the weekend. I presume the booking scheme is just to control numbers.

Once you go in through the entrance and plain hallway, you turn the corner into the sumptuous double height atrium with huge circle cut into the ceiling offering hints of the elegance above. To one side is a large meeting room/reception which would look perfectly at home in a modern posh hotel. 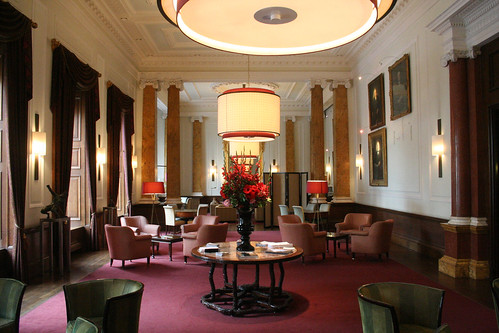 Back into the atrium and up the lift to the second floor, along a very narrow corridor and through a small door takes you to the upper level which was hinted at from below. 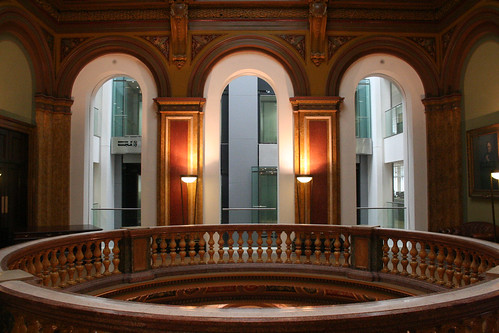 A more modern board room with double height ceiling to one side leads you eventually into one of the stranger rooms I have ever seen.

The room – originally the drawing room – is the same size as the huge reception below, double height with stunning ceilings.

However, what really stands out are the two modern “cubes” inserted into the room which are presumably used for highly confidential discussions between the bank and its super-rich clients. 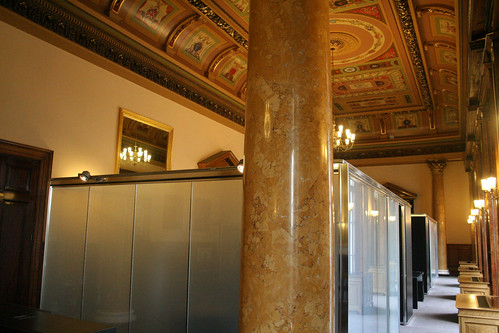 The rest of the room is filled with high quality, but otherwise quite ordinary office computers.

That was as much as we were allowed to see, the rest of the building is a modern office block that runs behind the Club.

Unusually for such a grand building, there seemed to be no sign of a suitably grand staircase. Research shows there used to be one, but it was removed in 1951.

More photos over at the usual location.

A more in depth write up about the history of the site at the ever excellent Survey of London.