Published 18 September 2010 by Events and Tours

Sitting on top of St James Park tube station is the headquarters of London Underground in the form of the rather dirty, but still iconic Art Deco building. Once the tallest building in London, it was the tip of the proverbial iceberg that is the tube network which is hidden underground.

This is 55 Broadway. Like The Gherkin (formally 30 St Mary’s Axe), this is a building without a name, just a location.

As part of Open House London, the building was open to the public for the first time in five years and the tickets were all snapped up in 35 minutes of booking going live on the Open House website.

Although I am familiar with the exterior of the building, I have never spent time studying it in depth, so arrived early and took a slower wander round taking photos. I also presumed that as tours were taking place, they might be a bit more relaxed about my taking photos inside the shopping centre that runs through the ground floor. 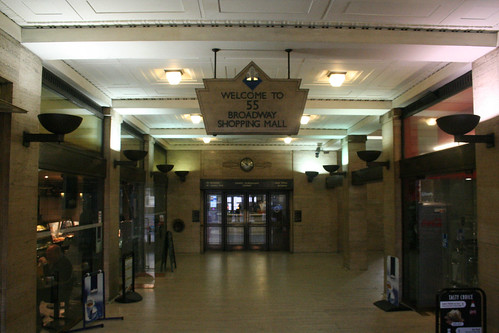 I am quite keen on Art Deco as a design concept, not just the aesthetic, but also the attention to tiny details.

The building itself was quite controversial when first built, mainly for the choice of sculpture used to decorate the exterior – with one director of the railway offering to pay for their removal. Since then though, the design has become a classic and is now protected. 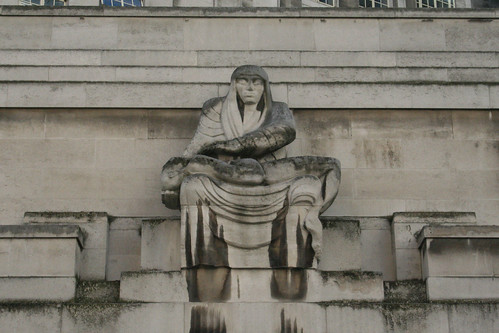 Upon going inside to the ground floor office (via the wrong door initially) and saying hello to the chap who took me around Aldwych tube station a couple of years ago – it was time to wait for the tour to begin. A question about taking photos of the lobby area actually resulted in some confusion and a phone call to security.

No – absolutely no photography permitted inside the building, only outside.

An offer to leave bags with security was taking up by some people, although I – wisely as it turned out – decided to keep mine with me.

Right, first off take the lifts to the top of the building and there onto the roof garden to see the view. Hmm, aren’t we now outside the building? Yes we are – so out came the cameras! So glad I didn’t leave my camera bag behind.

The only stipulation is that we didn’t point our cameras at New Scotland Yard next door – they really don’t like photographers. 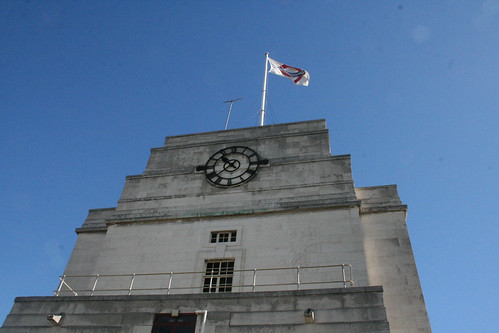 There has always been a roof garden here – dedicated to the wife of a former Managing Director in recognition of her enthusiasm to encourage this early form of environmental work. It was recently refurbished though. A second roof garden is now given over to a “green roof” for wildlife and also has solar panels on it.

Now a really special treat that I wasn’t expecting – a chance to go even higher up – to the very top of the building above the clock.

Going up a very narrow metal staircase that would be a problem for people who are scared of heights and past various rooms full of boilers – through a quite small door and you find yourself standing next to the huge flagpole.

Yes, we are outside the building again, so take photos of everything except New Scotland Yard. Slightly irritatingly, someone had left a crane right in the way of the best photos! 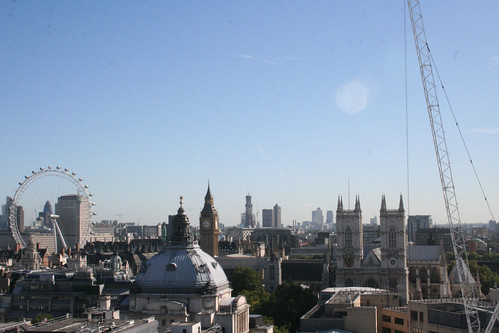 We were also shown some photos of the view from the roof of what it looked like when the building was first constructed. Quite a difference! 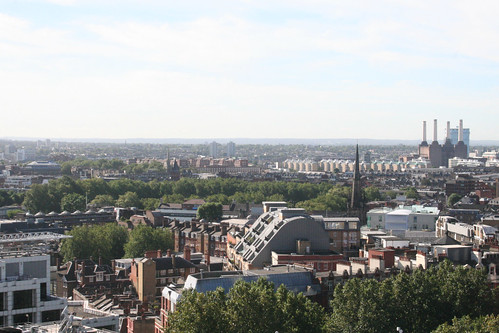 Back down and inside again and to have a wander round a small display from the archives department. Now down a few floors to the director’s level.

Here the lobby is pure Art Deco and you are standing in the centre of the building, with the four wings running off each side. While most of the office areas are modern open-plan offices, one wing is retained in its original wood panelled corridor with the Chairman’s huge office at the end. The Chairman has been booted out though, and the room is now used for meetings.

Taking the lift down a few more floors and a chance to walk down the main staircase which transitions from municipal tiling to finely decorated as you got closer to the ground floor.

A quick look around the outside to point out the key details and then the tour was over.

While very disappointing not to be allowed to take photos of the main lobby areas, as they are quite magnificent, the unexpected visit to the top of the building was a treat, and makes up (slightly) for not being in the ballot for the BT Tower.

There was a BBC4 series called Art Deco Icons presented by a James May lookalike last year, where he got a tour of the building – and took a film crew in with him – so if the programme is repeated, keep an eye out for it to see what I saw today.

He didn’t go on the roof though 😉

They also handed us a reprint of a booklet originally handed out when the building was constructed, a couple of leaflets about the decoration and a pamphlet about the building.

A fellow tube geek was on the same tour and his photos are here.