Published 14 November 2008 by By Ian Mansfield Events and Tours, Science

Did you know that the world’s largest nuclear fusion reactor is based here in the UK – in fact, just outside Oxford? Well – it is. Before you worry about Oxford’s towering spires melting in a nuclear fireball if something goes wrong, I should point out that fusion is the “nice face” of nuclear power generation.

The version which goes into bombs and causes worries in power stations is actually nuclear fission – a totally different sort of power.

What’s the technical difference? Well, fission (the icky stuff) is where atoms are split, and can get carried away into causing very large bangs. Fusion, is the combining of two atoms to release energy, and can only occur under very difficult conditions. Sneeze at the wrong time and the whole thing just collapses into an inert gas.

Despite being nuclear – the research centre is quite open to letting the public having a look around, and they held a public open evening on Wednesday night, which had me catching a train from Paddington to have a looksie.

Slight cheat – I had actually been once before several years ago, but it was also just a couple of weeks before I was hospitalised with an illness that managed to wipe a large chunk of my memory. I went back as about the only thing I could remember was that I had been there – and that was about it.

After arriving we got a short explanation of what fusion power is (and isn’t) and why we need it.

Another way of looking at it is that a bath full of water, and the lithium metal inside one laptop battery contain enough energy to supply an average person with enough electricity to last 30 years. Pretty impressive stuff.

The other big advantage of fusion as it uses basically, hydrogen and lithium. OK, slightly more sophisticated than that – but in essence those two items, both of which are very plentiful, and also unlike uranium – pretty much useless for making bombs.

The problem as mentioned above is that fusion is very difficult to carry out – as you are basically trying to repeat the process which occurs in the very centre of the Sun.

In its simplest format – a fusion reactor will heat a plasma inside it to a toasty 200 million degrees Celsius, at which point it become electrically charged and can be confined inside the reactor safely using massive electromagnets. As the plasma is manipulated, some of the spare protons will be allowed to escape and they will be used to heat up a liquid metal “blanket”, which in turn will boil water and drive steam turbines, just as normal power stations work.

At the moment, JET – the world’s largest fusion reactor can generate 16MW of power. However, it takes 20MW of power to get to that point, which is slightly pointless. The good news is that a much larger fusion reactor is about to be built, the ITER – and that is expected to punch right though that barrier and be able to generate about 500MW of surplus power.

So, that is fusion – and now we are off on our tours. We were split up into teams and our team headed straight over to see MAST – which is a next-generation fusion reactor which the UK’s Atomic Energy Authority is financing.

JET is a D shaped reactor, whereas MAST is spherical and thanks to that can generate power out at a much lower energy in – but it is still very experimental. It is expected though that once commercial fusion reactors are working, that MAST will be the concept for the nex-gen models.

Naturally, we can’t see inside the nuclear reactor, but we can walk right round it – and are literally just a couple of metres from the core as it is very safe. 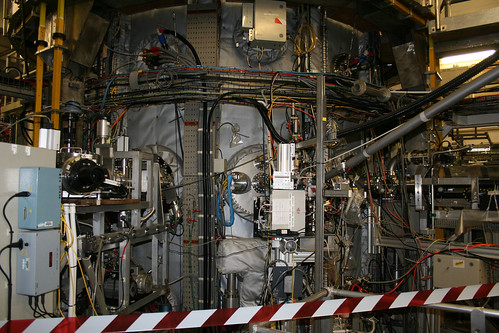 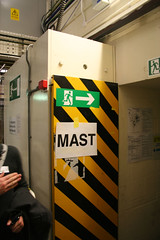 They do however, have massive doors around the reactors. When the machines are operating they produce some radiation and the doors are closed to ensure that none of the neutrons and gamma rays leak out. After the experiment, the gamma rays decay very quickly and they can open the place up about an hour later.

Throughout the evening, we had several guides who kept up a running commentary as to what everything did and why – and did a good job of answering our questions. As the science is so specific though, it was difficult for a (for example) specialist in plasma theory to answer questions about other aspects of the research work. 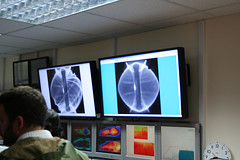 Near MAST was the small control room – where we got to see a time-lapse video of how the plasma looks inside the reactor.

Wandering round the place – and on to the room next to JET.

Alas, on this specific evening JET was actually in use so we couldn’t go inside the reactor room, but we could see the life-size model in the room next door. Although the system is safe, it does still generate a small (by nuclear standards) amount of radioactivity, so it is unwise to go inside the reactor chamber. People can if really, really necessary go inside, it’s just better to use robots and the model is what they practice with.

Dotted around the place are scale models and display boards to explain what is going on – this is a place which gets a lot of VIPs and scientists coming to have a look around.

Although we were unable to see the JET reactor itself, we were in for an unexpected treat. As we went to the observation deck to see the control centre, the manager can over and told us we could come inside and watch a live test carried out. OK, all we got to see was a tiny computer screen, but it was quite interesting to see it live. 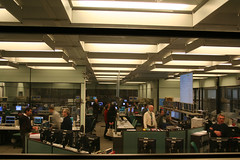 They were slightly hoping for a “disruption”, which is where the power gets out of control and the whole JET reactor shudders with the power surge. A disruption is bad as it can damage the reactor – and the huge bangs as the whole thing jumps (alarming!) are picked up by the seismic detectors at Oxford University some 10 miles away – but they can also be good as the scientists are trying to find the limits of the reactor.

We didn’t get a disruption though – and the manager quipped that maybe they should have more tours as JET never seemed to disrupt when the general public were around.

The evening over, and a quick questionnaire to see what we thought of the visit and then a swift walk back to the train station for the next train back to London. Missing the 10pm train would be problematic as it was an hour for the next one – and while there is a pub next to the station, I wanted to get home.

A final note – fusion power has always been “just 20 years away”, but at last that statement is actually correct. ITER is expected to start generating power as a test generator in around 5-7 years time and the first fully commercial reactor start construction about 5 years after that. Unless something very odd happens in the energy sciences – the world will start generating clean, cheap nuclear power within 20 years time. Now that really will be a momentous moment.

Culham have a few open evenings each year and the next ones are in March and May 2009 16th February and March 2011. Visit their website and fill in the form to request a ticket, it’s a fascinating evening out. It’s also free of charge!

I had a note from a Culham engineer correcting my earlier comment about the purpose of the huge doors – so I corrected my text above where appropriate.