The International Space Station will be passing right over London next Thursday (22nd July) and will be both exceptionally bright and at a decent time to see it.

The contents of Professor Stephen Hawking’s office when he worked in Cambridge are to go on display at the Science Museum.

The Science Museum is to become a Covid vaccination centre

The Science Museum in South Kensington is being drafted in to support science's fight against the Covid virus, as it's to become a mass vaccination hub for the local area.

A celestial conjunction for Christmas

Later this month a rare event will occur in the heavens, as Jupiter and Saturn appear closer together in the skies than they have for nearly 400 years.

OK, it's actually the International Space Station, but if you are dragged awake at an ungodly hour by the kids, then why not go out and watch "santa" rehearsing his present delivery run?

The UK’s largest optical telescope – is in London

An observatory operated by UCL in North London has acquired a new telescope, which happens to be the largest of its kind in the UK.

See a Mercury mission spacecraft in the Science Museum

Sitting near the back of the Science Museum is a full-size model of a spacecraft that's currently on a journey to Mercury.

Having been closed for several years for repairs, the telescopes at Hampstead Observatory will once again be open for people to peer at the stars.

A short trip outside London is a huge silver UFO shaped building, and in August will be a chance to go inside to see the particle accelerator it houses.

Tickets Alert: A week of science in pubs is back

The annual Pint of Science festival is back once more, putting lots of science inside pubs and letting people learn over a pint. The event, now in its sixth year takes place in the second half of May. Tickets cost…

The International Space Station will fly over London this weekend

The International Space Station will make a number of its occasional passes right over London this weekend and if you know what to look for, you can watch it pass overhead.

Stephen Hawking’s wheelchair is up for sale

What do you do when a famous wheelchair is now sadly no longer occupied -- put it up for sale to raise money for charity.

A large room at the top of the Science Museum, normally filled with schoolchildren has also gained a huge new mural by the illustrator, Sir Quentin Blake.

The Science Museum has added a little playful twist to their image archive with a random image generator.

London to get a new Science Gallery this September

A new science and art venue is opening later this year at London Bridge that aims to make scientific research accessible to visitor through installations and a programme of exhibitions and events.

In the countryside not far from Didcot can be a found a stunning flying saucer of a building, which also happens to house the UK's national synchrotron, and there's a chance to go inside for a look.

The now annual festival of science talks that take place in pubs across the country is back next month, and the line up of talks has been announced.

Science as art at the Wellcome Collection

Is it science, art, or maybe both. An art exhibition seeks to explore the connection that sees science turned into art, with rather variable end results.

It was a time of the death of kings, and a 17th century Englishman proposed a space programme with the ambition of reaching the moon. 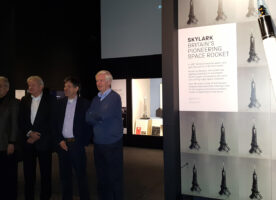 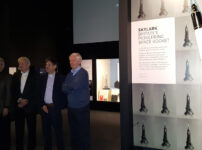 Conceived before NASA, before Sputnik, Britain was leading the space race with the development of the world's longest running, yet oddly little known, space rocket programme.

One of the highlights of the annual science entertainment calendar is making a return, with an evening comprising of an eclectic mix of science, humour, really bad poetry and a small girl interrupting the speakers. 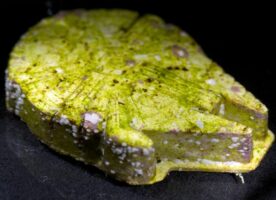 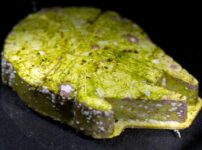 In a topical diversion, a South London museum has persuaded baby corals to grow into special moulds in the shape of Star Wars spacecraft.

Tim Peake’s Soyuz spacecraft to go on display in London

The Russian Soyuz spacecraft used by Tim Peake in his mission to the International Space Station is to go on display in London following its acquisition by the Science Museum.