The Museum of eww, urgh and yeuk!

Alternatively known as the Hunterian Museum inside the Royal College of Surgeons of England – after John Hunter who collected most of the items on display.

John Hunter was a surgeon of some note in the 18th century at a time when surgery was still a new science and where the mortality rate quite high. There was no formal training to become a surgeon – and John Hunters biggest innovation was to start teaching the “art” more formally to students and applying more rigorous scientific methods to what had been a somewhat slapdash affair.

He had a house right in Leicester Square (now a nightclub), and behind it was his school. To separate the two buildings he set up a museum of medical specimens – not just human but also animal. It was this collection which formed the beginning of the Hunterian Museum.

After his death, the museum was purchased by the government and given to the Royal College of Surgeons of England.

Alas, the building was hit by a bomb during the second world war and two thirds of the artifacts lost in the fires which followed. Nonetheless, what is left is still impressive – and considerable. The museum was recently revamped and I wandered along for a look this afternoon.

As you go into the building, you have to get a visitor pass, and then it is up a grand staircase and into the museum. Alas, no photos are allowed. The museum is effectively split into four sections. Running around the wall on the lower level is a collection of medical instruments and historic artifacts from John Hunters time. In the center of the room, creating its own “room” is a vast glass shelving structure with thousands of glass bottles with medical specimens – the heart of the original collection. 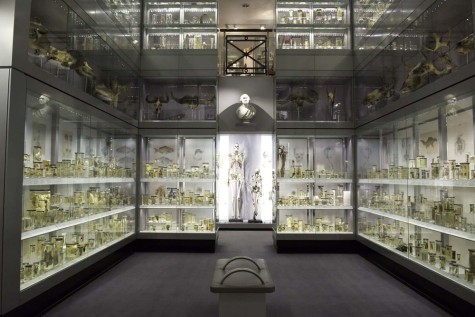 There is then an upper level with a very interesting display of the history of medicine and surgery – and a small side room with displays of modern medical instruments.

There some quite amazing and gruesome displays – ranging from the skeleton of the “Irish Giant”, who was nearly 8 feet tall to half the brain of Charles Babbage (not sure where the other half is).

I spent about an hour there wandering round, and I am sure a person could easily spend half a day there if you wanted to – although that is a bit much for me.

2 Pings/Trackbacks for "The Museum of eww, urgh and yeuk!"