An experimental tube tunnel dug in the 1970s, then sealed up and never seen again, until recently. A recent structural inspection has taken photos of this little known part of London Underground’s history.

To know why there’s a tunnel laying under the streets of New Cross, it helps to go back to how tunnelling technology existed at the time.

One of the many* reasons why the tube is a bit like a taxi driver, in that it won’t go south of the river is that the geology isn’t as nice to tunnel through.

Goodbye to solid clay and hello to soft gravels and sands.

Back in the early 1970s, it wasn’t thought possible to dig a tunnel safely through such soft soils, but as the extension of the Fleet line (as the Jubilee line was then known) was expected to pass through South London, a radical new tunnelling technique was tried out.

What they were testing was the recently invented Bentonite Shield, a way of pressurizing the front of the cutting head so that the soft gravelly soils wouldn’t collapse before the tunnel rings could be installed.

Tunnelling in soft soil wasn’t entirely impossible before, but very difficult, and often very dangerous, as the method was to create a sealed box at the end of the tunnel and pressurize it with air, then send in workers to dig the tunnel by hand. The manual workers then sometimes suffered long term health problems.

This was how the Northern and Bakerloo line tunnels were dug in the days before the arrival of the Tunnel Boring Machine.

It works, but is not a nice way to work. So an alternative was needed, and that resulted in London Underground approving this British designed experimental tunnelling technique in the 1970s. 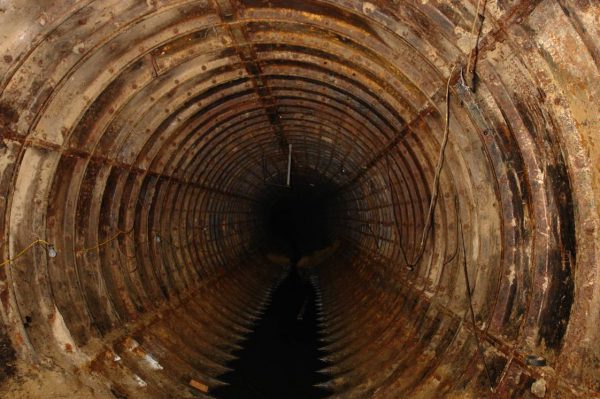 What is called the Bartlett Tunnel is around 144 meters long, running from a hexagonal shaft that was 19.6m deep. The tunnelling machine was delivered to the site on 12 December 1971, and the first drive attempt took place on 24 February 1972.

Incidentally, it’s called the Bartlett Tunnel after John Bartlett, a director at the consulting engineers, Mott Hay & Anderson who came up with the idea of the novel tunnelling shield.

The front of the tunnelling shield was pressurised with a slurry made from a type of clay often used in construction, Bentonite. The bentonite forms a skin on the tunnel face and seals it, so preventing collapse. One tunnel ring at a time is built up from cast iron segments in the tail of the machine, the machine pushing itself forward by jacking against the completed ring.

One interesting fringe benefit discovered during operations is that the use of the bentonite slurry provided a watertight tunnel. The bentonite soaks into the surrounding ground and formed an impermeable layer around the tunnel.

However, as in most tunnels, waterproof on the first day rarely stays waterproof.

Surveys were carried out in 2009 and 2015 to ensure its structural stability due to surface works for the Thameslink project upgrade on the railways that run near by the abandoned tube tunnel.

Before they could inspect the tunnel, it had to be pumped out, as water had, unsurprisingly, leaked in, flooding it to a depth of up to 1.5 metres in places. You can just about make out the water line in the photo below 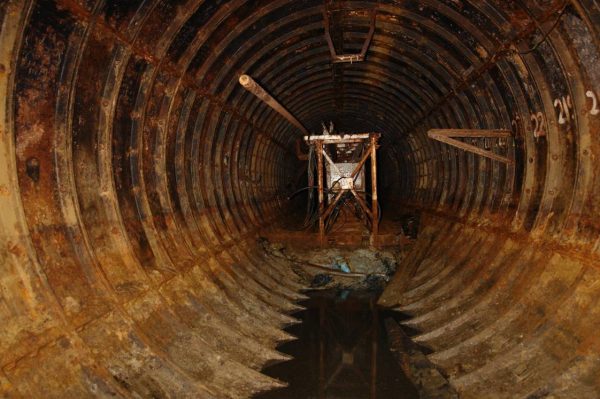 What the inspection found is that the tunnel and shaft are in reasonable condition, though the supporting framework to the slab that seals the tunnel entrance shows signs of deterioration.

The end face of the tunnel consists of the original experimental cutter head of the tunnelling machine which was abandoned at the end of the experiment. 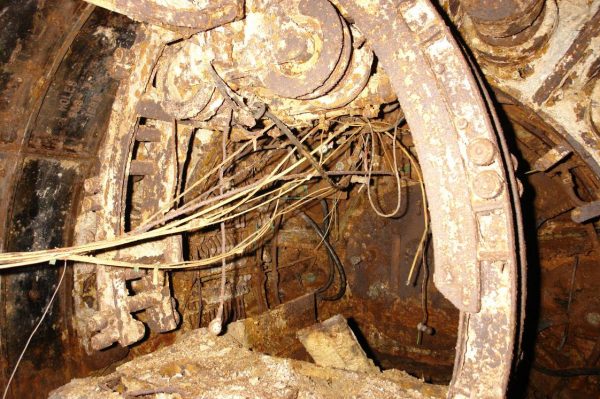 The tunnel was built in part to test the possibility of digging through the soft South London ground, but its location was no accident either — the tunnel was due to be put into use as part of the Jubilee line extension to Thamesmead. That was never built, so the tunnel deep under New Cross remains unused, and flooded.

Although it was dug to test an extension of the London Underground, in the rather curious way things are handled, legally it’s now owned by London Overground, who gained it when they took over the East London Line.

At the moment, the tunnel is stable, but there is a recommendation that it should be filled in, because leaving it as it requires a long term cost in maintenance and inspections.

While the cost wouldn’t be insignificant, it would be nice to see if the cutting head could be removed first, as it is an important part of tunnelling heritage, that lead to the development of cutting heads that are in use to this day around the world.

Copyright of the photos used in this article is owned by TfL. If you would like to re-use the information please contact TfL. Requests for re-use will be considered in accordance with the Re-use of Public Sector Information Regulations 2005 and, where the disclosed information is a dataset, section 11a of the Freedom of Information Act.

*opposition from mainline railways was the major factor