London’s transport network has now seen more than one billion pay as you go journeys made by contactless payment cards.

Since early 2016, the proportion of pay as you go journeys made using contactless rose from 25 percent to more than 40 percent today. At around 80 stations across London, including Clapham North Underground station, Shoreditch High Streetand Gatwick Airport, the proportion is even higher – regularly hitting over half of all pay as you go journeys.

Of these, almost one in 10 contactless transactions are now made using mobile devices, with more than 31 million journeys made specifically using mobile phones in London in the last 12 months. Apple Pay, Android Pay and Samsung Pay can all be used to make contactless journeys.

In total, almost £2 billion has been spent by customers using pay as you go with contactless since it was introduced.

TfL’s contactless payment system was first launched on London’s buses in December 2012 and expanded to cover Tube and rail services in London in September 2014.

You can see the spike in usage in the graph: 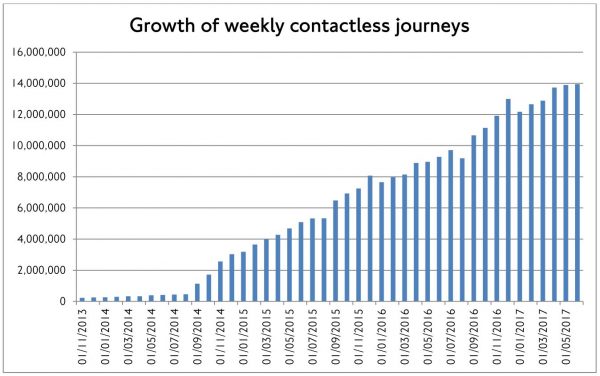 As contactless payments use the customer’s existing bank card, visitors to the UK no longer need to buy an Oyster card on arrival.

Customers from more than 100 countries have now used contactless payment cards and mobile devices, with more than 20 new countries, including Estonia, Morocco and Peru, having been seen for the first time in the last year. 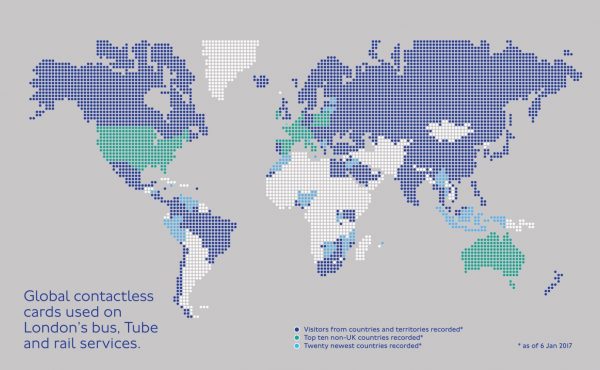 In January 2016, pay as you go using Oyster and contactless was extended to cover National Rail services between London and Gatwick Airport.

From May 2018, new ticket readers will be installed at Heathrow, meaning passengers using Heathrow Express and TfL Rail between Paddington and Heathrow will be able to use pay as you go Oyster or a contactless device.

Last year, Southeastern announced that passenger journeys on High Speed One services between St Pancras International and Stratford International increased by 72 percent following the introduction of pay as you go with Oyster and contactless in July 2015. The high-speed service now sees 12,000 journeys a week made using pay as you go, more than half of them regularly made using contactless payment cards.

Also last year, TfL signed a deal worth up to £15m with Cubic Transportation Systems (CTS) allowing them to adapt the Capital’s contactless ticketing system worldwide. Since then, CTS has progressed discussions with a number of cities, including Sydney and Miami, to introduce contactless ticketing technology to their transport networks in the future.