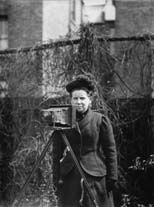 This was Christina Broom, and while not the first professional female photographer, she is credited as being the first such press photographer, who took her work outside the studio and into the streets.

Born in 1862, she didn’t take up photography in earnest until she was in her 40s, and by necessity following an accident which rendered her husband unable to work full time. He still worked, as her assistant, as did her daughter.

A family firm that took photographs and printed them into the then incredibly popular postcards and sold them, often back to the subjects of the photos themselves.

She was also a canny businesswoman, often pushing through crowds to get the best photo, and not adverse to dropping business cards around if it meant possible access to a commercially lucrative subject.

In that time, such subjects were the Royal Family, and she built up a decent relationship with them to take a lot of photos over the years. She also became a semi-official military photographer, being allowed inside Chelsea Barracks and recording intimate moments within.

Being a working class, self-taught, and female put her off the establishment radar, she was quite an establishment photographer, focusing very much on establishment figures and institutions. Understandable as that’s where the money lay, but her willingness to deliberately overlook photos which might have been less flattering puts her strongly in the camp of portrait photographer rather than press journalist.

That changed somewhat when she started photographing the suffragette movement.

Only in the early days, as she distanced herself later on as the movement became more violent, possibly because she disagreed, or as speculated, because her association with them could have harmed her more lucrative establishment photography.

While most of the photos, which have gone on display at the Museum of London Docklands are of typical staged settings – which was necessary in the days of early photography — its the suffragette photos which are most appealing.

A room is given over to photos reproduced from the original negatives, but at a much larger scale.

These are aesthetically the most fascinating of the set, and not because of their topic, but because of an effect of how they were taken.

Longish exposures in public locations as marches are about to take place are of people standing proud and alert, surrounded by ghostly images of people who moved during the exposure.

It’s as if the activists past are coming back to life while surrounded by a sea of ghosts flitting away as they await their own resurrection. Not even the fake ghost photos of Victorian charlatans have the quality of intangibility that Christina Broom accidentally captured. 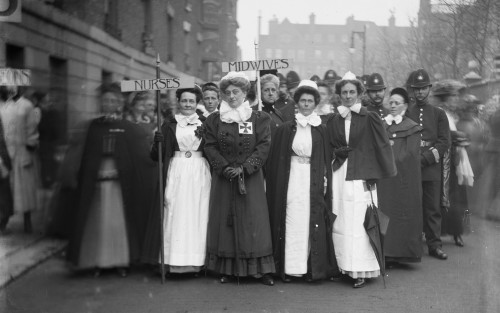 A short video in another room shows the process of producing these photos, showing the images slowly develop and swimming in their sea of chemical amniotic fluids.

A display of staid posed shots is brilliant enlivened by these last few photos.

The exhibition, Soldiers and Suffragettes is open until the end of October at the Docklands Museum. Entry is free.