Published 27 November 2010 by Events and Tours

This year happens to mark the 100th anniversary of the London Mosque Fund, set up to create a place of worship for Muslim sailors and workers increasingly visiting the London Docks – and coincidentally, the East London Mosque is having one of its occasional open weekends.

The Mosque on Whitechappel Road is itself was only completed in 1985, after 75 years of occupying various rented buildings around the area – including a period where their former home was compulsorily purchased from them by the Greater London Council. 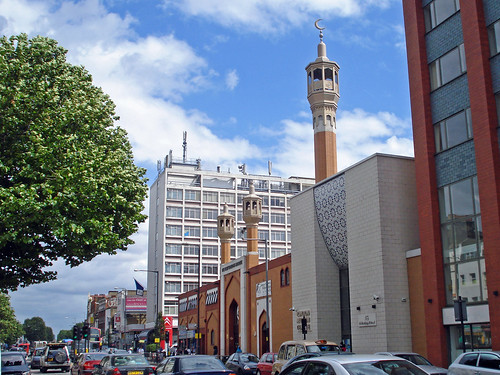 Next to it is a more recent construction, the London Muslim Centre, which occupies a former car park and was only sold to the organisation following a public campaign in the late 1990s.

It’s inside the newer building that a large set of display boards are set up explaining what Islam is – and, thanks to more shrill tabloid headlines – what Islam isn’t. Considering that the Koran can quite a visually appealing book, one of the more interesting Koran’s on display was made up of blank brown pages. Blank that is, apart from the imprint of Braille lettering.

Surprisingly running into Tom of Tired of London fame, who was also there for a tour (not to worship!), a smallish group was taken to the Mosque next door, first having removed our shoes.

I knew shoes had to be removed (and wore slip-on shoes for ease!), but never actually thought about why. Nothing to do with religion, it’s simply that if people are to sit on the carpetted floor, then it’s nice if other people aren’t walking in muck on their shoes.

Going around, our guide jokingly referred to the Mosque as a forbidden area, where actually, everyone is welcome.

The interior is a quite plain, but very large box room with the atmosphere more of a community centre than a place of worship – and indeed, in a large part it is more a community centre in which worship happens to take place. The atmosphere is very relaxed, with people sitting around the place chatting in small groups or coming in to pray for a short time.

Sitting on the carpet, our guide gave a good introduction to the principles of the religion, the six articles of the faith, and the five pillars of Islam. After about 30 minutes, leaving the Mosque we were given a Koran and some introductory leaflets with an introduction to stay for tea and coffee.

Quite an interesting visit – and the Mosque is open tomorrow (Sun 28th Nov) as well from 11am to 5pm. The guided tours are at noon, 1:30pm and 3pm, and I’d allow maybe half an hour to cover the exhibition as well before the tour.

Not that I knew what it meant, I was just mimicking the sounds!