What was once the V&A’s regional outpost in the east of London has a newish display on at the moment, and as I was sort-of local, popped over for a look and a nibble.

I had a fairly nice, if pricy coffee and cake there a couple of years ago, so after a look at some old dolls houses, time for lunch in the Museum of Childhood.

It’s another of the Benugo outlets, and the canteen type space is right in the middle of the museum, surrounded by exhibits. This is a museum that puts food right at the heart of its offering, so what’s the food like?

It took several tours around the museum before I felt it might be safe to join the perpetually lengthy queue for food, so that there would be seats available by the time I paid.

The food selection was kid-friendly fish fingers, or some pies or toasted sandwiches.

Opting for the pie, a load of potato wedges were added unbidden and I was offered a handful of salad. A coffee and time to find somewhere to sit. I had timed it poorly, and ended up asking a couple on a nearly empty table if I could share.

I think it was a social faux-pas judging by the reaction, and then the couple spent the next few minutes complaining about the noise of children… in a museum of childhood.

I actually agree that screaming kids are not the most pleasant of sounds, but what did you expect in a museum for children?

The food was also as disappointing, being basically a supermarket pie, and the rest. The coffee was average. All served on trays and canteen plates in a noisy cheap looking eatery.

Yet, the place was packed. It’s not as if there is a lack of places to eat locally, but maybe the size of the venue and its child friendly layout makes it an oasis for parents in need of a break.

An overpriced, mediocre break though.

When I was paying, the cashier announced that I was having the weekend special. Sadly, it wasn’t to be. 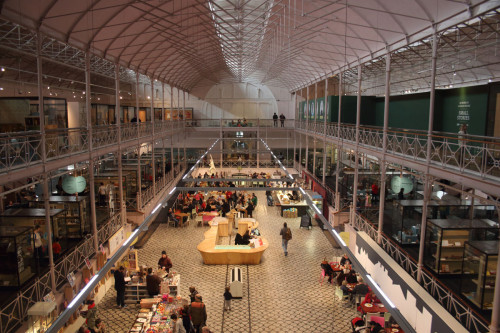