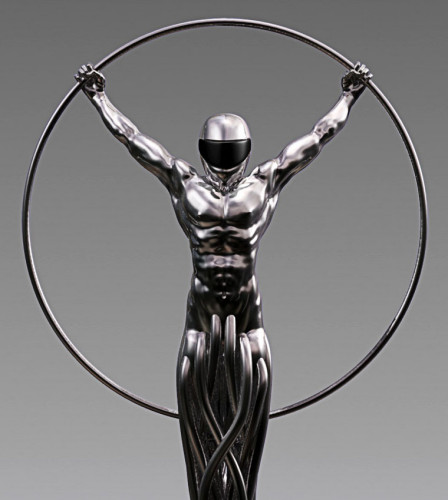 Designed by Tom Maley, it is actually supposed to be of Perseus, slayer of Medusa, and where he is often depicted holding the snake covered head of the Gorgon, here he is in totalitarian pose with snake-like mechanical cables forming a Manga style base.

The arms outstretched and the loop of steel being reminiscent of Leonardo da Vinci’s Vitruvian Man.

But it can’t be denied, that it looks a bit like the pseudonymous character from a certain television show.

The Soho Society objected to the display, claiming that Tom Maley is not a professional artist, which is about as snooty a response as I have ever seen to a planning application.

The local council adopted a more sensible approach, and the sculpture, Persyus will be installed in Soho Square from April to the end of October.